The Perseverance rover has been monitoring the flights of the Ingenuity helicopter on Mars for the past month. Between those cases, the rover took the scenery and has spotted a variety of interesting rocks.

Perseverance is now preparing to carry out its primary mission, which is to research Jezero Crater and look for evidence of ancient life on Mars.

The crater was filled with a lake that was fed by a river delta around 3.9 billion years ago. 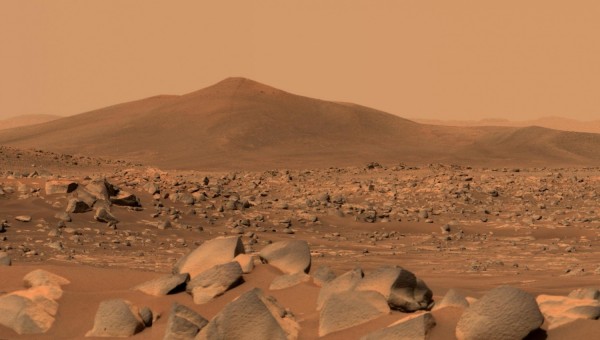 Rocks strewn around the dry lake bed may now aid scientists in reconstructing the history of this region on Mars and determining whether or not life ever existed there.

The information contained inside the rocks could say more about when the lake developed and dried up and when the delta's sediment started to pile up.

Researchers will be able to date rock samples collected by the rover during the next two years by creating a timeline that corresponds to rocks.

Future missions could return these samples to Earth, which may contain microfossils that preserve the presence of ancient life.

The rover's most recent photos show rocks and pebbles scattering across the crater floor, as well as a hill known as Santa Cruz, which is about 1.5 miles (2.4 kilometers) away.

Jezero is located north of the Martian equator and is about 28 miles (45 kilometers) wide. Curiosity's landing site in Gale Crater is 2,300 miles (3,700 kilometers) away.

SuperCam, a laser instrument, is one of the rover's cameras and instruments that aid in its rock investigations. Science Times previously reported that it already zapped several rocks to know their chemical composition.

It's crucial to figure out what kinds of rocks are present in this field. If they're sedimentary, they probably formed near water and may contain minerals, sand, silt, or clay that retain biosignatures, or signs of past existence.

Igneous rocks, which volcanic activities produced, serve as timestamps and provide an accurate picture of when they were formed.

Over time, these rocks were exposed to wind and radiation. Layers of sand and dust have built up on top of them. A geologist would break open a rock in the field to learn more about it.

"When you look inside a rock, that's where you see the story," said Ken Farley, Perseverance's project scientist at the California Institute of Technology, in a statement on NASA's website

Perseverance may not be able to pound the rocks around it, but it does have a weapon on its robotic arm called an abrader that can grit and flatten the surface of rocks.

The rover's instruments will then look inside the rock to learn more about the chemicals and minerals it contains.

"The more rocks you look at, the more you know," Farley said in the same statement.

Perseverance To Answer Questions About Mudstones

One of the most pressing questions for scientists is whether these rocks are sedimentary, such as sandstone, or igneous, created by volcanic activity.

NASA, as reported by the Daily Mail, said each form of rock tells a different story,

Any sedimentary rocks, which are made up of rock and mineral particles including sand, silt, and clay and formed in the presence of water, are best suited to maintaining biosignatures, or signs of past existence.

Igneous rocks, on the other hand, are more accurate geological clocks that allow scientists to establish a detailed timeline of how an area evolved.

The rocks surrounding Perseverance have been eroded by wind over time and coated with newer sand and gravel, which adds to the complexity.

These crystals, according to Farley, are most likely mudstones, which were once mud at the lake's bottom.

He clarified that these are crucial for their research because this is the kind of ecosystem that we expect to be more habitable by species that might have lived billions of years ago on Mars, as well as having the potential to retain biosignatures over billions of years.

Until going northwest toward the ancient, dry river delta, the rover will collect three or four samples in the area.

Perseverance must complete several additional tests to prepare its sampling method and driving capability before this compilation can begin.

According to Jennifer Trosper, Perseverance rover deputy project manager at JPL, the team expects Perseverance to obtain the first sample in July.

The rover team will be able to finish up their exploration efforts and brace for a communications outage between Mars and Earth in mid-October, as the two planets are on opposite sides of the Sun when Ingenuity will complete flight operations by the end of August.