A new study reported by Phys.org has revealed what causes the deterioration of modern structures built of concrete and asphalt over time - the presence of small amounts of organic matter.

However, modern cement and asphalt structures were found to deteriorate much faster compared to older structures built with other materials, although the reason remained unknown - until now.

They presented their findings, as well as novel methods of assessing deterioration, in the article "Deterioration of modern concrete structures and asphalt pavements by respiratory action and trace quantities of organic matter" appearing in the latest PLOS ONE, May 13. 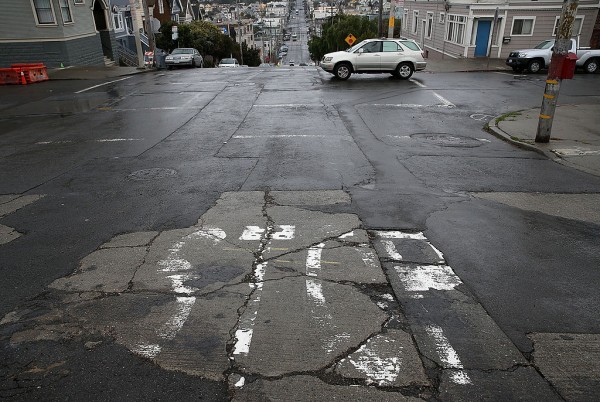 (Photo: Photo by Justin Sullivan/Getty Images)
SAN FRANCISCO, CA - FEBRUARY 26: Cracked asphalt and concrete are visible at an intersection on February 26, 2014, in San Francisco, California. During a visit to St. Paul, Minnesota, U.S. President Barack Obama announced plans for a four-year, $300 billion proposal to fix, build and maintain thousands of miles of U.S. road and railways.

Researchers discovered that organic matter in concrete structures and asphalt pavements, present in trace amounts, causes the eventual deterioration of these construction materials. Deterioration of concrete and asphalt over time remains a major issue in the fields of engineering and materials science, with this condition usually characterized by cracks, disaggregation or the breakdown into fine powdery materials, and delamination or material separation into layers.

Once these materials have started deteriorating, they are no longer safe for their intended application; with rapid deterioration reducing the supposed lifespan of the structures built from them. This, in turn, leads to increased costs for maintenance or worse, replacement.

The Japanese researchers then developed a novel method of assessing deterioration rates in concrete. Existing methods for this requirement involve measuring the width of cracks in the surface of concrete materials, paired with a chemical testing process. However, this method does not completely and accurately assess the state of deterioration.

In their experiments, researchers noted the presence of a "strange odor" that was created when commercially available cement was mixed with water. It led them to hypothesize that organic matter might be causing this odor and went on to investigate the effect organic matter has on concrete materials.

To further study their observation and hypothesis, researchers developed a one-dimensional transient moisture permeation apparatus. This setup allowed them to simulate the environmental conditions in the field to which concrete structures and asphalt pavements are regularly exposed to. This allowed them to observe the response of these construction materials in a controlled laboratory setting for a 24-hour period.

Conducting CT scans on the materials further illustrated the extent of the deterioration to an unprecedented level. They then tested different asphalt samples dating back to 1960, as well as a variety of concrete samples from all over the world, including a 120-year-old concrete sample as reference.

The organic materials researchers found include phthalates - a common plasticizing material - as well as diesel exhaust particles, surfactants, and even windshield washer fluids. Researchers suggest that these materials might be introduced during the manufacturing process or absorbed from the environment.