Rare Giant Squid's Hunting Behavior Caught in Camera for the First Time, 2,500 Feet Under the Sea

Researchers outsmarted a rare elusive giant squid with a little trick catching the hunting behavior on film 2,500 feet under the sea in the Gulf of Mexico.

Giant squids have been a captivating topic for many marine scientists; however, the elusiveness of the deep-sea creature has made it difficult to closely observe. Partly due to the depths it thrives in and its natural instinct to steer clear of unknown organisms, the first giant filmed was only recorded in 2004. 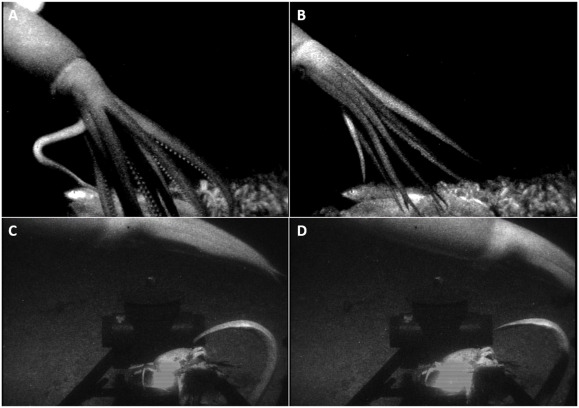 The rare giant squid thrives in the deep pelagic ecosystem, one of the least studied biomes on Earth. This is partly why we know very little about deep-sea creatures and were only able to film the giant squids in recent years.

Large cephalopods live up to their name; according to the Smithsonian Ocean the largest ever recorded reaches lengths of 43 feet long and is estimated to weigh almost a ton.

Its body looks as simple as your average squid. It has a beak, two eyes, eight arms, a funnel called a siphon, and two feeding tentacles except it's much much bigger than the norm.

The giant squid's feeding tentacles can snatch its prey up to 33 feet away by shooting its feeding tentacles that are tipped with numerous sharp-toothed suckers. Its eyes are the largest in the animal kingdom and can absorb more light than its smaller counterparts allowing the rare giant squid to glimpse bioluminescent prey or steer clear of lurking predators.

Scientists designed E-jelly specifically to imitate the glow of jellyfish which is known to be irresistible to the rare giant squid. At the same time, a bag of mahi-mahi fish was strapped to E-jelly to provide extra excitement to the large cephalopod.

This resulted in a unique video of a 12-foot Architeuthis dux rising from the depths to devour its prey. In the video, you'll see how the squid slowly approaches the E-jelly before it wraps its large feeding tentacles around the decoy thinking it captured an easy meal.

The striking video also marks the first time the rare giant squid was filmed in US waters.

In a study published in Deep Sea Research Part I: Oceanographic Research Papers entitled, "Studying the swift, smart, and shy: Unobtrusive camera-platforms for observing large deep-sea squid," authors wrote that humanity has always been captivated by stories of Kraken's however, our knowledge of the large deep-sea cephalopod that inspired the myths remained limited.

They add that conventional deep-sea exploration methods like manned submersibles, nets, remotely operated vehicles, and the like are perfect for studying slow-moving sessile organisms. Meanwhile, baited camera traps tend to lure scavengers rather than predators.

As an answer, scientists deployed Medusa--remote-controlled devices that are designed to attract and film sea creatures at impressive depths.

5 Medusa's were deployed in the US Gulf of Mexico before researchers were able to capture the extraordinary video.

Check out more news and information on Marine Biology on Science Times.