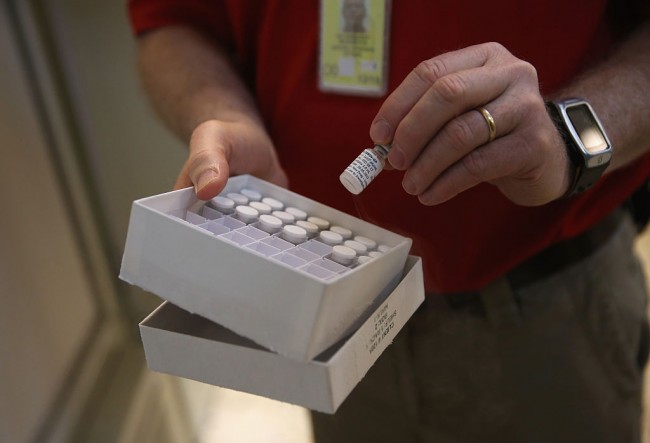 (Photo : John Moore/Getty Images) A doctor displays Ebola vaccines to be given in the vaccine trials which were launched at Redemption Hospital, formerly an Ebola holding center, on February 2, 2015 in Monrovia, Liberia.

Researchers recently developed an Ebola virus vaccine that has shown promise in rabbits and mice. Specifically, what the scientists developed is a new nanoparticle-based shot for protection against the virus.

A Drug Target Review said, researchers at the Scripps Research, United States, have revealed a new Ebola virus vaccine design, which they described as having a lot of advantages compared to standard vaccine approaches for the said virus.

In this new design, reproductions of the Ebola virus outer Spike or S protein, also identified as glycoprotein, are fastened to the spherical carrier particle's surface. 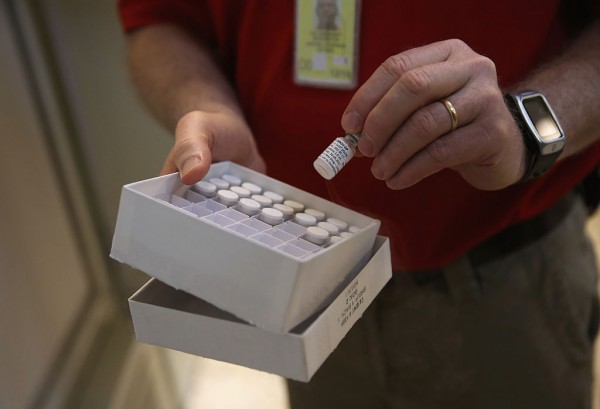 (Photo: John Moore/Getty Images)
A doctor displays Ebola vaccines to be given in the vaccine trials which were launched at Redemption Hospital, formerly an Ebola holding center, on February 2, 2015, in Monrovia, Liberia.

The resulting structure is akin to the spherical appearance of typical RNA viruses infecting humans and is blatantly different from the Ebola virus's snake-like shape.

Essentially, this nanoparticle-based structure is presenting the glycoproteins to the immune system the same as the typical usual human viruses, and therefore, the body has learned to recognize the spherical particles.

In this design of the team, the genetic codes of the optimized glycoprotein, described by the National Library of Medicine, as a nanoparticle-forming unit, the locking sphere, and the T-cell epitope are all controlled in one piece of DNA.

In cells, the study, Single-component multilayered self-assembling nanoparticles presenting rationally designed glycoprotein trimers as Ebola virus vaccines, published in Nature Communications, specified, this DNA is generating a single-protein chain that has the ability to self-assemble, forming the proper structure and linking to other identical chains to develop virus-like protein ball with numerous layers.

According to the researchers, the design is intended for the stimulation of a better shielding immune reaction compared to standard vaccine approaches, which frequently expose the immune system to distinct glycoproteins, instead of realistic-looking virus particles.

If they designed the vaccine, the study authors also altered the outer S protein to be steadier compared to the wild-type version that exists in the Ebola virus. Testing rabbits and mice, the researchers showed that this stabilized version stimulated virus-neutralizing antibodies more strongly compared to the wild-type glycoprotein used in previous approaches for Ebola vaccines.

Here, according to the inventor of the new Ebola virus vaccine, Dr. Jiang Zhu, they did a step-by-step examination of glycoprotein stability, not to mention how that impacts the ability of the vaccine to produce antibodies. Dr. Zhu also said, in the end, they were able to develop a really promising design for an Ebola virus vaccine.

According to the Centers for Disease Control and Prevention, a safe and effective vaccine is an essential mechanism to shield frontline workers and avoid the onset and spread of Ebola in the US.

In the information posted on the CDC website, it was also specified that the Ebola virus is a "zoonotic pathogen" that results in severe hemorrhagic fever in humans, called Ebola virus disease or EVD.

Essentially, there are four Ebola virus species that have been known to lead to diseases in humans. Of these species, EBOV or Zaire ebolavirus is the most fatal, with death rates of 70 to 90 percent it left uncured.

EBOV is accountable for the majority of outbreaks previously recorded. It comprises the two largest outbreaks history has ever had and these are the 2014 to 2016 West Africa outbreak and the 2018 outbreak that occurred in the eastern Democratic Republic of the Congo that infected more than 30,000 people and claimed the lives of more than 13,000 people.

Related information is shown on CBS This Morning's YouTube video below: