A new study recently showed a darker, warmer Greenland, resulting from a weather pattern that's pushing snowfall away from parts of its ice sheet.

A Phys.org report said the decrease in "the amount of fresh, light-colored snow" reveals older, darker snow on the ice sheet's surface.

This resulting drop in reflectivity, which is called albedo, leads the ice to absorb more heat, which is also possible to contribute to more rapid melting.

According to Dartmouth College associate professor of earth sciences, Erich Osterberg, as snow ages, even over several hours to a few days, such a reduction is gotten in reflectivity, and that's the reason fresh snow is very essential. 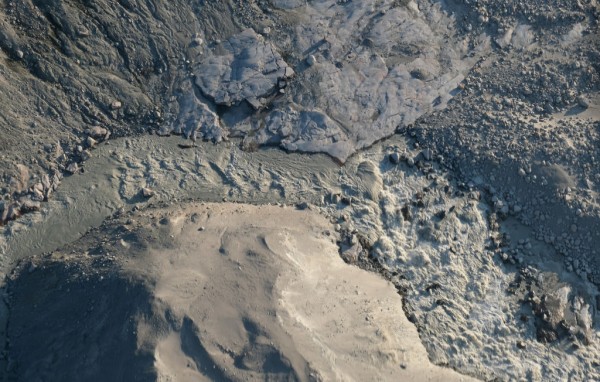 (Photo: Sean Gallup/Getty Images)
Climate change is having a profound effect in Greenland, where over the last several decades summers have become longer and the rate that glaciers and the Greenland ice cap are retreating has accelerated.

The study specified the reduction in snowfall is an "atmospheric blocking" result in which persistent high-pressure systems are hovering over the ice sheet for a maximum of weeks at a time.

The systems, which have increased since the middle of the 1990s decade over Greenland, are pushing snowstorms to the north, holding warmer air over Western Greenland, and decrease light-blocking cloud cover.

Describing the occurrence, Osterberg said, it is like a triple whammy effect. This, he continued, all adds to the faster and faster melting of Greenland.

According to this study, the result is not just less snowfall, rather, it is also a different snow type on the surface.

As snowflakes melt or evaporate, they turn out to be rounded and less reflective compared to newer, crystal-shaped snow.

This then leads the snow surface to turn darker. The research team said a one-percent change in reflectivity across the ice sheet of Greenland could lead to a 25-gigaton additional, of ice to be lost over three years.

Gabriel Lewis, the study's first author who conducted it as a Ph.D. candidate at Dartmouth said, fresh snow looks like what a child would draw in kindergarten class, or would cut from a piece of paper. It's got all the really sharp points, and that's because it is extremely cold in the atmosphere each time the snow is falling.

Once the snow falls, added Lewis, and sits on the ice sheet's surface in the sun, it is changing in shape and the snow grains turn larger in size over time.

The team collected data for the research while on a two-summer snowmobile trek at 2,700 miles across the region of the ice sheet of Greenland, also called the western percolation zone.

The study authors found just about one part per billion of impurities in the snow. This helped them identify that the snowflakes' changing shape, forced by the persistent high-pressure systems, was the possible cause of the darkening, instead of dust or bacteria.

It is some of the world's cleanest snow, explained Lewis adding, in their study area, the impurities are not appearing to be adequate to account for the change in albedo, as described in Arctic Program, that other research groups have presented.

Based on research cited in the study, the Greenland ice sheet has warmed approximately 2.7 degrees Celsius since 1982.

Related information is shown on SpaceRip's YouTube video below: