SpaceX Falcon 9, Heavy Rockets to Bring at Least 6 Moon Landers in Next Launch

Firefly Aerospace chose SpaceX to launch NASA's first lunar lander mission on May 20 via Falcon 9 rocket. It's the latest in a string of lunar contract wins for Elon Musk's company.

SpaceX's Blue Ghost lunar lander will be launched in 2023 on a mission to land in Mare Crisium on the moon's near side, according to Firefly. 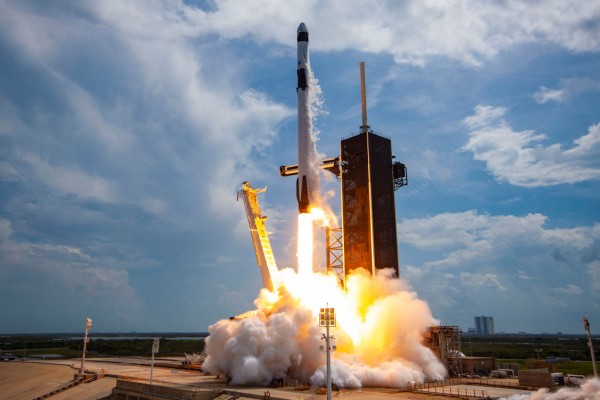 (Photo: SpaceX via Getty Images)
In this SpaceX handout image, a Falcon 9 rocket carrying the company's Crew Dragon spacecraft launches on the Demo-2 mission to the International Space Station

The lander would carry ten payloads for NASA's Commercial Lunar Payload Services (CLPS) program and additional commercial payloads as part of a deal it received in February.

According to Space News, SpaceX plans to launch the Falcon 9 rocket bearing Intuitive Machines Nova-C landers in the first and third quarters of 2022. In the same year, it will also fly the Masten Space System's XL-1 Lander.

The original decision, according to Teslarati, is to focus on Firefly's 330-pound Alpha, the first Blue Ghost spacecraft. The fact that it is carrying NASA payloads inside complicates its journey to the moon. The components are three times as large as Alpha's, so it's no joke that SpaceX gets another lunar perk for its dedication.

Israel's Beresheet spacecraft was launched earlier in 2020 as part of previous flights. On the other hand, the Middle East-based firm has taken a beating as a result of the mishap.

The lander's avionics failed, causing it to crash into the moon before its scheduled landing. However, there is also no clear evidence that what occurs proves the argument to be true.

Firefly is pleased to announce we selected SpaceX to launch our Blue Ghost lunar lander for the NASA CLPS 19D mission. We’re excited to leverage the performance and reliability of Falcon 9 to propel Blue Ghost on the first phase of its journey to the Moon! https://t.co/YLJJK8rlLd

The sense of the Beresheet effect could teach Firefly's Blue Ghost lander a thing or two.

More importantly, this will serve as a reminder to the Israeli Aerospace Industries (IAI) to thoroughly examine the cause of the unexpected blunder and consider remedies for their next launch. Some people would currently expect IAI to confirm its future lunar rover mission within a year of the debacle breaking.

Returning to SpaceX and NASA's CLPS initiative, the California-based space transportation company won five of the six lander contracts. ULA's Vulcan Centaur rocket had one of them incorporated with it.

TechCrunch said NASA is using the CPLS initiative to grant private companies missions to carry out tests on the moon's surface in part as a warm-up for the upcoming Artemis human lunar exploration and potentially long-term habitation flights.

The Blue Ghost will carry about 150 kg (330 lbs) of cargo thanks to the Falcon 9's performance specifications. Like many other CLPS providers, Firefly plans to accept payloads from other private agencies in addition to NASA experiments and then market the space to generate additional revenue.

The first CLPS lander is set to launch in the fourth quarter of this year, with a total of six landers awarded and expected to launch tentatively through 2023.