Scientists have long suspected that organic salt exists on Mars, and NASA believes it has discovered a way to confirm it.

Planetary scientists from NASA's Goddard Space Flight Center in Greenbelt, Maryland, have been sifting through the rover's photographs and results.

NASA said they discovered organic or carbon-containing salts on Mars that are chemical traces of organic compounds. 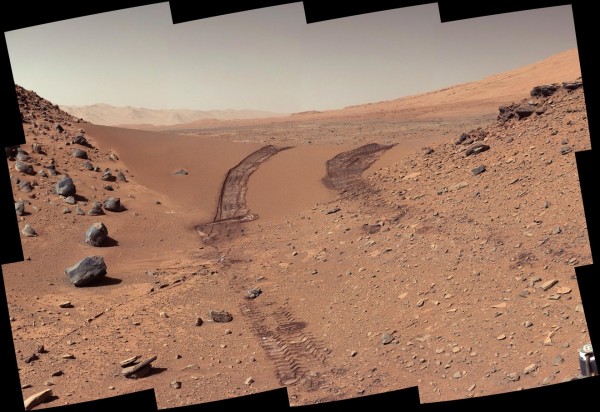 (Photo: NASA/JPL-Caltech/MSSS)
This looks back at a dune that NASA's Curiosity Mars rover drove across was taken by the rover's Mast Camera (Mastcam) on Feb. 9, 2014 – the 538th Martian day, or sol, of Curiosity's mission.

Organic compounds and salts may have evolved as a result of geologic processes or as a result of ancient microbial activity, indicating that the earth was once habitable.

The Curiosity rover's current equipment isn't up to the task of deciding if they're organic. Still, the team believes this is the case.

The study, titled "Pyrolysis of Oxalate, Acetate, and Perchlorate Mixtures and the Implications for Organic Salts on Mars," used data from the Sample Analysis at Mars (SAM) - a compact chemistry lab within the Curiosity rover - to infer the presence of organic salts.

SAM heats Martian soil to the point that gases are emitted, allowing it to determine the soil samples' composition.

Experts will then determine whether these organic salts were formed by geological processes or by ancient life.

Analyzing Organic Salts in the Lab

Martian oceans have dried out over the last three billion years, and the earth has been relentlessly bombarded with solar rays.

For such a thin atmosphere, the planet's surface is scarcely shielded from the Sun's rays, which breaks down most materials.

Furthermore, natural erosion caused by wind and weather will further break down any remaining microorganisms.

While the existing data seems to be encouraging, potential Martian rovers would have to search further into the earth to decide if life existed on Mars in the past.

Since billions of years of radiation have erased or split off much organic matter, the challenge is difficult.

"We're trying to unravel billions of years of organic chemistry, and in that organic record there could be the ultimate prize - evidence that life once existed on the Red Planet," said Lewis in a statement released by NASA.

"When heating Martian samples, there are many interactions that can happen between minerals and organic matter that could make it more difficult to draw conclusions from our experiments, so the work we're doing is trying to pick apart those interactions so that scientists doing analyses on Mars can use this information," he added.

Jennifer L Eigenbrode of NASA Goddard mentioned in a DailyMail report that they discovered organic matter trapped in 3-billion-year-old rocks. Their finding, according to Eigenbrode, is a very positive indication that they will be able to extract more detail from better-preserved samples under the soil.

This circumstantial evidence isn't enough to prove that these salts exist. But it's a strong hint that they do. More intensive studies into these salts and locating the locations where they are localized may (and possibly should) be prioritized in the future.