Meteor showers are caused by the Earth's orbit passing through debris left behind from comets. However, a recent analysis indicates that these celestial phenomena could spread to comets that pass Earth every 4,000 years or so.

According to the latest study, these long-orbited comets have appearances that last for several days, with the radiant looking more like a smudge on a window. 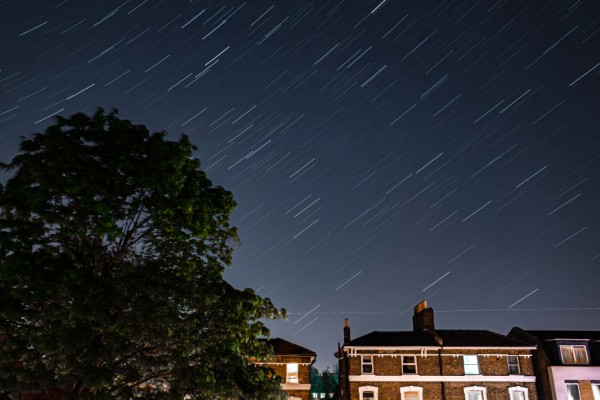 (Photo: Simon Robling/Getty Images)
LONDON, ENGLAND - APRIL 20: (EDITORS NOTE: Multiple exposures were combined in camera to produce this image.) Stars illuminate the sky on a clear night in Forest Hill on April 20, 2020, in London, England. The clear skies created by the New Moon coincide with the Lyrid meteor shower, an annual display caused by the Earth passing through a cloud of debris from a comet called C/186 Thatcher.

The radiant is the location that meteor showers begin to originate to an observer on Earth.

Experts aren't sure when this occurs, but it may be due to these comets' orbits being subtly changed.

Fourteen long-orbit comets have now been discovered (possibly as many as 20), up from five before the research.

"These are the shooting stars you see with the naked eye," said the study's lead author, Peter Jenniskens, in a statement released by Seti Institute.

"By tracing their approach direction, these maps show the sky and the universe around us in a very different light," Jenniskens added.

What Is A Meteor Shower?

News18 said a hot comet produces a massively glowing head the size of most planets. Its dust and gas-filled tail extend millions of kilometers out from the sun. Meteoroids are the fragments of comets that, if near enough to the Earth, penetrate our atmosphere and resemble a shooting star.

When there are many of them, they form a meteor shower, which is a spectacular display that is watched by stargazers worldwide. However, it is the molecules in our planet's atmosphere that light up due to the pressure that causes the shooting stars to shine.

Meteor Showers That Could Last For Days

The results indicate that comets with orbits of more than 250 years but less than 4,000 years will produce meteor showers that last for many days.

"This was a surprise to me," Jenniskens, a senior research scientist at the SETI Institute and NASA Ames Research Center, added per SciTechDaily.

Jenniskens explained these comets have likely visited the solar system many times before, with their orbits changing over time.

According to Space.com, one of these comets is C/2002 Y1 Juels-Holvorcem, which made a close approach to the Sun in 2003.

Comets C/1861 G1 Thatcher, C/1911 N1 Kiess, and C/1739 K1 Zanotti, which cause the Aurigids and Leonids Minorids meteor showers, respectively, to have long orbits and are associated with meteor showers.

Jenniskens is the team leader for CAMS (Cameras for Allsky Meteor Surveillance).

The researchers were able to measure the trajectory and orbit of these comets thanks to observation stations set up for the project in the United States, Australia, Chile, and other regions of the world.

The majority of the comets have orbits ranging from 400 to 800 years, but some may collide.

'The showers that are the most scattered are potentially the oldest,' Jenniskens explained. 'As a result, it's possible that bigger meteoroids break up into smaller ones over time.'

It may also include new information about 'potentially dangerous comets' that passed close to Earth about 2,000 B.C., according to Jenniskens.

The study's results, titled "Meteor Showers From Known Long-Period Comets," will be reported in Icarus.