Full moons have always been an attractive enchanting site, but tomorrow, everyone can anticipate a particularly special night sky through the occurrence of the blood supermoon.

The Bustle site said, the moon is set to come out bigger, brighter, and in some sites, redder than usual. Based on the Old Farmer's Almanac, in the evening of May 26, the moon will ever be so nearer the earth, making it the biggest this year.

The term "super moon," NASA said, was invented in 1979 by Richard Nolle, an astrologer. It is a description of the full moon at its nearest point to this planet in its orbit.

The NZ Herald reported that for approximately 14 minutes, from 11:11 on Wednesday, the nearest point of orbit of the moon with the Earth is due to accord with total lunar eclipse, the first blood supermoon since the early 1980s.

Essentially, the moon will change in different colors during several stages of the total lunar eclipse, turning from original grayish into orange and amber. More so, atmospheric events can affect the colors' brightness, too. 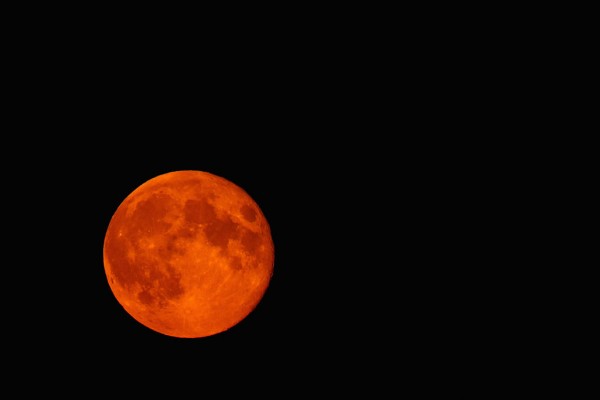 (Photo: Richard Heathcote/Getty Images)
A blood-red Supermoon is seen rising in the sky on September 9, 2014, in High Wycombe, England.

According to a Sky News report, a super moon appears approximately 14-percent bigger and 30-percent brighter than normal.

This media site also specified that Greenwich-based Royal Observatory's astronomer Patricia Skelton said, the best time to see the May 26 blood super moon will be in the early hours, around 2:15 am, of Wednesday morning, or later in the day at noontime.

As for the spots where the super moon can be seen, Skelton said, it will rise in the east approximately half an hour following sunset and will be visible all through the night.

The astronomer added, there is something magical about a full moon that people would want to catch a glimpse at it, especially at its brightest, not to mention, its biggest. However, she continued the weather may hinder such an opportunity of witnessing it at all.

The Best Sites to See the Supermoon

At present, weather presenter Nazaneen Ghaffar said, the clearest skies for the best views of the super moon appear to be through the central and southern parts of England, Wales, and Central Island.

People who are located in northeast England, as well as eastern and northern Scotland, may be disappointed as the cloud there could interrupt their view.

Those in the western part of the United States, western South America, Australia, and Southeast Asia will be able to view the Supermoon.

The change in color, Skelton explained, is not because of a physical change occurring on the moon, but simply due to the fact that the moon is drifting into the Earth's shadow.

This planet's atmosphere, she elaborated, is bending light from the sun and bathing the moon in a crimson red light.

Meanwhile, according to stargazing guides' recommendation, if one wants to experience the night sky's best view, he should, as much as possible, steer clear of light pollution.

Turning off the lights at home might be helpful, as will some background studies to get informed about what is being viewed.

Related information is shown on Victor Oddo's YouTube video below:

Check out more news and information on Eclipse and Full Moon on Science Times.