“Find Starlink” Portal Lets You Locate SpaceX Satellites in the Sky: Here’s How to Use the Fan-Made Website

(Photo : Jud McCranie via Wikimedia Commons) Some Starlink 6 satellites, seen April 28, 2020 over the US state of Georgia. Six satellites are easily visible, a seventh one is very faint on the right

As SpaceX grows its constellation of Starlink satellites for global Internet access, more and more of these space objects can be spotted across the night sky - and a superfan has developed a portal to help everyone track these satellites.

Known as "Find Starlink," the new online portal has provided space fans with a one-stop-shop to know when can they expect the next parts of the Starlink satellite constellation over their location. This follows increasing reports of people reporting that they're finding the SpaceX satellites: often described as a series of lights moving across the evening sky. These internet-providing satellites have been reported in Ireland and the UK and different parts of the US - Arizona, California, and more. One local report from KING 5, a local news channel, recently detailed a sighting over Washington skies, even noting how it interferes with an ongoing astronomical study. 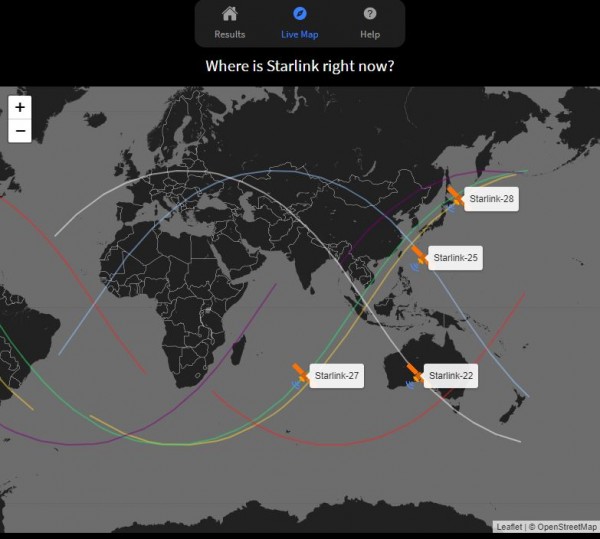 An Instant Hit With SpaceX Fans

In an interview with Insider, the individual who created Find Starlink - who remains anonymous - said that he made the website two years ago for himself and his brother and his friend living in other parts of the world.

"Find Starlink was created three days after the first Starlink launch (24 May, 2019) because I wanted to see the Starlink train and none of the existing websites tracked Starlink at that point," the anonymous creator told the news outlet. He shared finding "unbelievable images of the Starlink" and wanted to see them with his own eyes. Designing and creating the website in just one evening, he shared having about half a million requests for Starlink locations within the first five days since it was launched.

The Insider report also notes that the site creator had been contacted by a variety of people - including those who helped develop Apollo rockets and those who request to rule out UFO sightings.

Find Out When Starlink Satellites Appear

A simple and intuitive web design is used in the Find Starlink website, with "The amazing Starlink 'train'" used in its background. It allows visitors to choose their location by name - from a long list of locations - or by coordinates. Clicking the "Find Visible Times" button shows the results, including the locations and the schedule in the local time zone. Results are sorted based on which "timings" have good, average, or poor visibility. 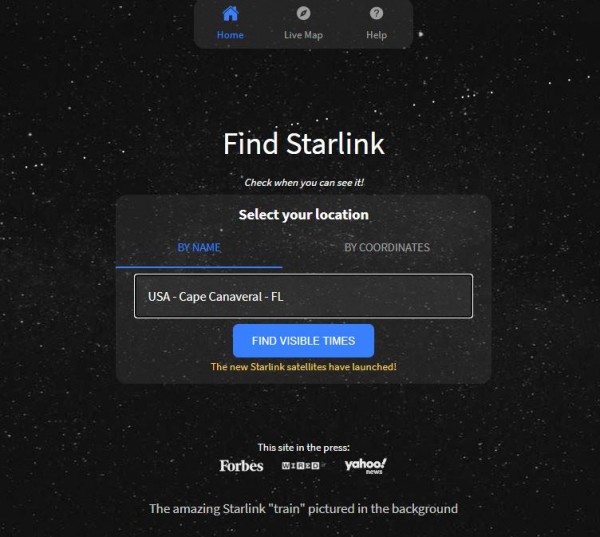 Search results also detail how long the trails last and which directions to look, as well as the elevation from the horizon of each sighting suggestion. It also has a disclaimer saying that the timings are not 100% accurate, as well as timings that might not be visible "based on recent user reports."

Another impressive feature is its Live Map, which allows users to monitor the various parts of the SpaceX Starlink constellation as they move around the world. A black and white map of the world can be zoomed in and out, with various color-coded streaks showing the trajectories of the Starlink satellites.

RELATED ARTICLE: Japanese Space Firm to Launch Satellite That Will Use Magnets to Clean Space Junk

Check out more news and information on SpaceX Starlink Satellites in Science Times.