A potential addition to the tree frog species has just been discovered by scientists in New Guinea, and it's unlike anything seen before. One unique characteristic of the newly discovered frog is its skin pigment, typically green, the frog has an adorable chocolate-like color.

Paul Oliver, a co-author of the study and phylogeneticists from Griffith University, says that the discovery came as a surprise since Australia's common green tree frog has been extensively studied for years, and yet an overlooked relative has been discovered living in the lowland rainforests of New Guinea.

Science Alert reports that this is the reason why researchers decided to name the new chocolate-like frog species as Litoria mira, Mira meaning strange or surprised in Latin. The chocolate frog seemingly resembles the tasty treats from "Harry Potter" films which jump like living frogs. 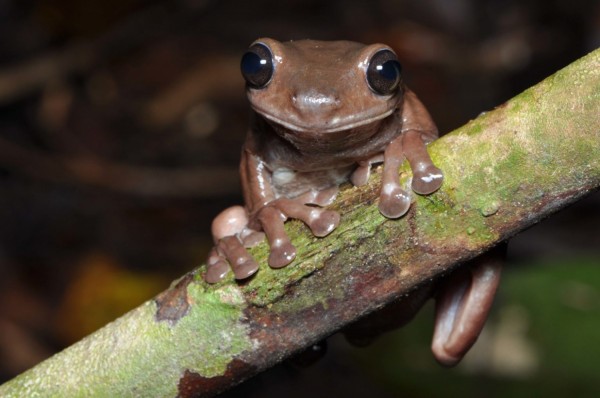 The research was initially looking more deeply at the widely common Australasian tree frog genus known as Litoria across Australia and New Guinea.

In the world of frogs, there has been a bit of confusion and debate as to whether the common Australian tree frog belongs to the Litoria family or not. In 2016, researchers published a study in Biotaxa where they split the Litoria family into several separate genera. This led to the conclusion that the common Australian green tree frog actually belongs more under Ranoidea.

Despite this, some scientists are skeptical, citing missing data in the genetic analysis as the reason behind the conclusion.

The team investigated the habitat of the green tree frog known as Litoria caerulea, tracing it across Australia and New Guinea's northern parts. The two lands are merely 150 kilometers apart at their closest and once were connected by land bridges back when the planet was colder, and sea levels were lower.

Researchers hypothesize that there could have been significant intermingling between species from both regions, including the common green tree frog. This resulted in the frog's ability to expand across varying climates, such as in New Guinea, where there is mostly rainforest, and in northern Australia, predominantly in the savannah.

In a study published in the Australian Journal of Zoology, entitled "Multiple trans-Torres Strait colonisations by tree frogs in the Litoria caerulea group, with the description of a new species from New Guinea," researchers wrote that the newly discovered chocolate tree frog is unique to other Litoria members. It has a unique combination of large dorsal coloration, which is uniformly brown.

The newly discovered chocolate-like frog also has ventral surfaces on its limbs and densely striped dark to medium brown regions on its throat and torso. Researchers state that the discovery does not intend to say that there are no other brown species of tree frogs. Today, there are 215 species in the Litoria and Ranoidea that aren't bright green.

Steve Richards from the South Australian Museum explains that since the frog thrives in hot, tepid, swampy areas abundant with crocodiles, it may have evolved to discourage pigmentation from remaining anonymous in its surroundings. There is much more to be studied with the Litoria mira, for now, researchers are ecstatic at the discovery of a chocolate-like tree frog in New Guinea.