A new batch of images from Earth was captured by the International Space Station (ISS). The photos stunned people, even the astronauts, as the features of the planet resemble Mars. The captivating images were shared by Shane Kimbrough, an ISS current crew with his third trip on space. The images have a striking similarity to the surface of the planet Mars, but it is actually taken from Saudi Arabia's dunes. 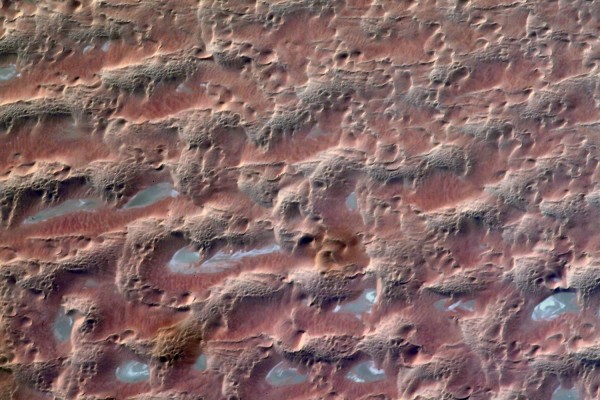 Saudi Arabia presents wonderful art in the form of its dunes. It was so good, it looks like another planet, Kimbrough said. One of the photos taken from Yemen near the Saudi Arabian border was also praised by the astronaut, as it shows vibrant colors and formations that are out of this world.

Mars is famous for many of its characteristics, including its dune patterns. These patterns were the results of rock formations constantly changing over time. Some of the magnificent patterns are the effect of the red planet's atmospheric conditions and gas activities on the surface.

Dunes are of course existent on Earth. We have many dunes that are still untouched, and if lucky, people could spot and take an image of these field patterns. Being an inhabited planet, Mars contains a lot of virgin dunes that have formed for millions of years. Most of the dune fields from the planet are believed to contain water before. Lakebeds, sedimentary rocks, and clays are some of the evidence which proves that ancient water bodies have already existed on the planet before, reports EarthSky.

NASA's Mars Reconnaissance Orbiter (MRO) also captured a very similar photo from Mars. The orbiter got the satisfying dune images from the red planet that heavily looks like the dunes from Earth. Alongside Kimbrough, another ISS crew member Thomas Pesquet is also fond of taking these extraordinary photos from our very own planet. Together, they capture breath-taking photos on the space station 250 miles above the space.

ALSO READ: Dark Matter Origin Still a Mystery: Is It More Than a Cosmic Anomaly?

The International Space Station carries Cupola, an observatory module that is mostly the spot for astronauts to take graceful pictures of Earth from space. Cupola might be a familiar module of the space station for many, is it is the part of the craft that has a seven-window that allows the panoramic views of Earth and space.

The Crew Dragon spacecraft, docked in the ISS, also offers photos that add up to the space station's collection of space images. The crew members of the ISS take their impressive shots using a number of professional, top-notch cameras and lenses such as variants from Sony and Nikon, reports Digital Trends.

Cygnus cargo spacecraft is featured among the latest images from the ISS. One photo shows the spacecraft hovering over Bahrain and Qatar. The ship, which was also captured by Kimbrough, arrived on the space station recently in February. Aside from Bahrain and Qatar, rock formations can also be recognized in an image taken from Wyoming's Bighorn River.

Kimbrough also shot an image of the sunrise, which can also be seen in the collection. Shane Kimbrough and Thomas Pesquest will be on the ISS until October.