The imminent climate change crisis demands a shift of energy sources from fossil fuels to green energy. Solar cells are used in industries and residences to generate energy, and recent developments are focused on making on-site energy generation or "personalized energy" possible.

These solar cells could hopefully be integrated into windows, vehicles, cellphone screens, and other everyday products by making solar cells transparent, unlike conventional cells, dark and opaque. 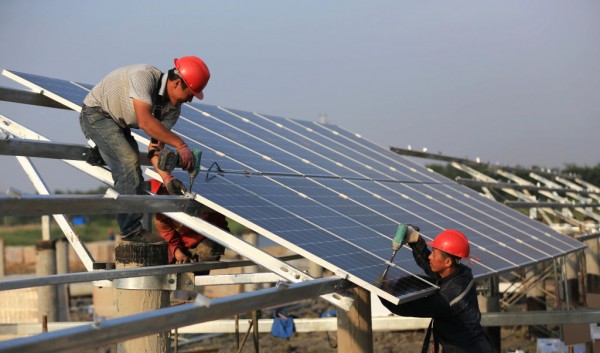 (Photo: Getty Images)
Workers install solar panels at the construction site of the 40MW photovoltaic on-grid power project of China Huaneng Group on June 11, 2018, in Huai an, China. The first phase with an installed capacity of 30 megawatts will be put into operation at the end of June this year. (Photo by VCG/VCG via Getty Images)

The future where "transparent photovoltaic" (TPV) devices could come soon as an international team of scientists developed a new type of transparent electrodes that can work as the building block of the see-through solar cells, Health Thoroughfare reported.

It has surpassed previous issues of TPV and set the groundwork for other collar cells that merge the technology of different technologies.

The team proved how ultra-thin golf films cold work as transparent electrodes for solar cells but due to inconsistent layers, it resulted in an unfavorable conductivity.

The researchers found that this could be solved using chromium as a seed for the gold film layer because it has a large surface area that will provide space for the gold to grow on top of it.

"Normally, if you grow a thin layer of something like gold, the nanoparticles will couple together and gather like small islands [...] Chromium has a large surface energy that provides a good place for the gold to grow on top of, and it actually allows the gold to form a continuous thin film," assistant research professor Dong Yang of Penn State said according to Health Thoroughfare.

Study author Shashank Priya said that the 5% increase of efficacy shown by the new technology is considered a big leap from previous models. Solar farms consisting of thousands of solar panels could make use of the new technology and make them even more lucrative.

Science Daily previously reported that researchers from Incheon National University in South Korea came up with an innovative design for a TVP device. They embedded an ultra-thin film of amorphous silicon between zinc oxide and nickel oxide to develop an efficient high-power producing transparent solar cell.

Transparent solar cells are most likely the cutting-edge new solar panel technology that could take the world into the era of personalized energy that will allow for on-site energy generation from windows, car's sunroof, and even in smartphones.

According to Solar Magazine, this technology can easily be deployed in various settings that could range from skyscrapers with large windows to handheld devices. Soon, it could simply replace the traditional glass windows in buildings and homes with its potential to virtually turn infrastructures into a solar energy producer.