SpaceX CEO Elon Musk recently announced the company is building Deimos and Phobos launch platforms in the ocean by 2022.

A BGR report describes SpaceX as by far, the largest, not to mention, the most successful private spaceflight firm ever, and it has been able to carve its position in the history books, giving credit to many "out-of-the-box" thinking.

The spaceflight company is a pioneer when it comes to reusable rocket boosters. It also successfully developed the Falcon 9, with an incredibly shiny record of flawless takeoffs.

The boosters' first stage is recovered with such an orderliness that it is a Falcon touchdown, as stated in the site's posted report, is hardly "even new anymore." 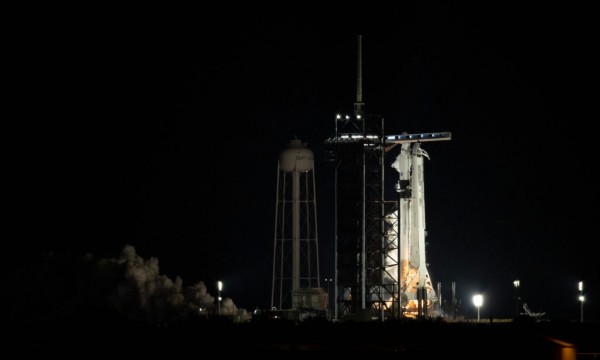 (Photo: Joel Kowsky/NASA via Getty Images)
A SpaceX Falcon 9 rocket with the company's Crew Dragon spacecraft onboard is seen on the launch pad at Launch Complex 39A during a brief static fire test ahead of NASA's SpaceX Crew-2 mission on April 17, 2021, at NASA's Kennedy Space Center in Cape Canaveral, Florida.

Deimos and Phobos in the Ocean

What most definitely will be considered news, the site specified, are the future launches from Deimos and Phobos platforms of SpaceX, which the firm is going to use in the future as launch areas for its various rockets.

A new site for launch might not appear like that of a big deal, although the site of the Deimos and Phobos is making them quite special.

The said two platforms, an engadget report said, are previously oil rigs, and the plan is to have them positioned in the ocean and perform launches from distant offshore.

In January 20201, NASASpaceflight.com reported, SpaceX bought the oil rigs months back and has been looking for sites where it can work on them. Presently, Phobos is positioned near Mississippi. Deimos on the other hand, is currently being worked on in the Port of Brownsville, situated on the coast of Texas.

Deimos appears to be the concentration at present, and in a new tweet from Musk, the launch platform's debut is teased for 2022.

There are plenty of places for SpaceX for its rocket launches, although it's moving closer and closer to pulling out NASA's Starship from its prototyping stage, and into the light, it will require more spaces for its future launches.

Early Starship models have been small compared to what lies ahead, and the engines that power such rockets are going to be extremely loud, as described in the BGR report.

The blast site will be quite huge as well. This means that Starship launches will require more space compared to what the Falcon 9 has required.

Having gathered this, SpaceX wants its own Starship spaceports where it can take off and land its rockets each time it needs to minus the worry so much about noise problems, as well as the dangers of launching close to populated sites.

Instead of purchasing a bunch of lands and having to experience more red tape than it already needs to, the firm has decided that constructing seaworthy platforms out of old oil rigs is the most ideal bet.

It was at first thought that one of the two platforms might even operate by the end of this year, but that proved to be a little too soon now that the work has started on one of the rigs.

Waiting time will at least be until 2022 to see takeoffs from the platforms, and there's so much work that needs to be done between now and whenever that finally takes place.

SpaceX is looking forward to that day when its Starship rockets will make regular trips to other worlds which include the Red Planet.

And, in that so-called "hypothetical future," platforms in the ocean like Deimos and Phobos could see a lot of traffic in space.

A related report is shown on Science of Space's YouTube video below: