False Positives in COVID-19 Test Are Alarming, What Causes It?

False positives are test results that inaccurately indicate that a particular condition is present when it does not. In testing for COVID-19, RT-PCR tests are considered to be the gold standard in detecting SARS-CoV-2 RNA.

These testing kits have been tested in laboratories often in idealized condition, with hospital samples containing higher viral loads than asymptomatic patients living in communities.

According to a study entitled "False-positive COVID-19 results: hidden problems and costs" published in The Lancet, this makes the operational performance of swab tests in the real world substantially different from the analytical sensitivity and specificity in the laboratory. 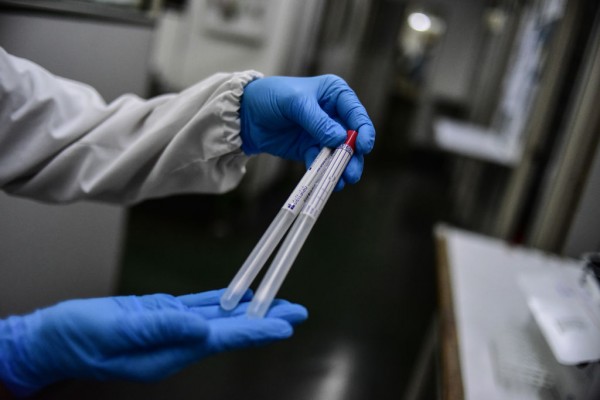 (Photo: Getty Images)
Biochemist Daniela Beatriz Ori shows swab samples as she prepares to make a real-time polymerase chain reaction (RT-PCR) analysis for COVID-19 testing at the biochemistry lab of Central Navy Hospital Dr. Pedro Mallo on April 28, 2020, in Buenos Aires, Argentina. The hospital, which is treating COVID-19 patients, has the capacity to process up to 36 swab samples a day. (Photo by Amilcar Orfali/Getty Images)

False positives could happen as a result of laboratory error and off-target reaction when the test reacts to something other than SARS-CoV-2, according to National Interest.

Laboratory errors could include clerical errors or testing the incorrect sample. It could also be due to cross-contamination from other samples which are positive for the virus and could also involve problems with the reagents or chemicals used during testing.

Dani Zander, MD, chief of Pathology and Laboratory Medicine at UC Health, said that false positives and false negatives are not common. "A false-negative test can happen if one has a very low viral load," Dr. Zander said, according to UC Health.

An infected person could have a very low viral load in the first couple of days after getting infected or at the end of the course of their infection. Dr. Zander added that some tests, like rapid tests, could be less sensitive in detecting the virus, which could yield a false-positive result.

ALSO READ: Why Does a Negative COVID-19 Test Do Not Guarantee That You Are Not Infected?

How Often Are False Positives?

The authors of a preprint, "False positives in reverse transcription PCR testing for SARS-CoV-2," reviewed the evidence of false-positive rates for the RT-PCR tests used in detecting SARS-CoV-2, National Interest reported.

They used data from multiple studies that looked at RT-PCR testing for SARS-CoV-2 and RNA viruses. They found that false positives happen at 0-16.7% times, while half of the studies showed false positives at 0.8-4%.

These false positives were reported in the systematic review that is based on the quality assurance made in laboratories. That means the accuracy of tests in the real world setting could be poorer than in laboratory studies.

Meanwhile, a systematic review of false negatives using RT-PCR tests for SARS-CoV-2, entitled "False-negative results of initial RT-PCR assays for COVID-19: A systematic review," showed that false-negative rates were 1.8-5.8%. But authors noted that this result is based on low-quality evidence as many of the studies reviewed were of poor quality.