A new study reported that initial analysis of medical evidence on the domestic mass shootings in the United States was by perpetrators who had mental illness but received no medication or any kind of treatment.

"Without losing sight of the larger perspective that most violent people are not mentally ill and most mental illnesses are not violent, our message is that mental health providers, lawyers, and the general public, patients who are not taking some medications, are at increased risk of violence," Dr. Islay D. Glick of the  Stanford University School of Medicine, reported the Florida News Times.

The researchers published the full findings of their study, "Domestic Mass Shooters: The Association With Unmedicated and Untreated Psychiatric Illness," in the Journal of Clinical Psychopharmacology by Wolters Kluwer Health: Lippincott. 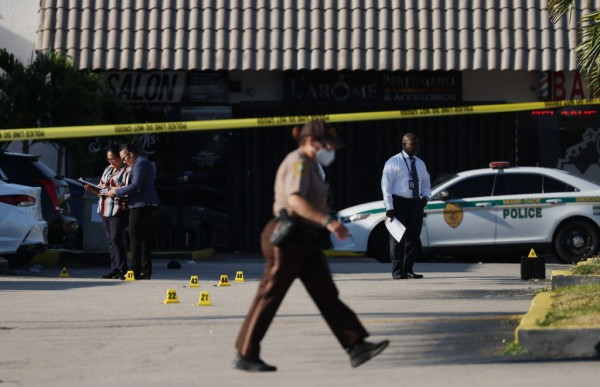 (Photo: Getty Images)
Miami-Dade police investigate near shell case evidence markers on the ground where a mass shooting took place outside of a banquet hall on May 30, 2021, in Hialeah, Florida. Police say that two people died, and an estimated 20 to 25 people were injured after the shooting early on Sunday, May 30 at a banquet hall, which was rented out for a concert. (Photo by Joe Raedle/Getty Images)

Researchers identified 115 perpetrators of mass shootings in the US from 1982 to 2019, excluding those firings related to "traditional motives" like robbery and gang violence, the news outlet reported.

They pointed out that the majority of perpetrators of these cases have died during or shortly after committing the crime. They focused on 35 cases in which perpetrators survived and were sentenced to prison where they presented symptoms of mental illness.

The team analyzed interviews of perpetrators with judicial psychiatrists and psychologists who joined in the investigation of the mass shootings. They also used other sources, like court proceedings, public records, video-recorded interviewers, and social media postings by the perpetrators.

They found that 32 out of 35 perpetrators show signs and symptoms of brain disease that meet the diagnostic criteria for psychiatric disorders.

Around eight perpetrators have shown symptoms of schizophrenia, while seven had other diagnoses, and five have unknown psychiatric diagnoses. Among all of the perpetrators, none of them were receiving appropriate medication or treatment of any kind.

But researchers acknowledged the limitations of their study, stating that the limited evidence on a small domestic group of shooters has no comparison group.

Nonetheless, their data showed that perpetrators of mass shootings may have been suffering from untreated psychiatric illness and that reducing the stigma associated with mental illness will help patients receive appropriate and adequate medication and treatment.

ALSO READ: Here's Why Americans Are Buying More Guns Than Ever

Mental Illness Does Not Cause Mass Shootings

Associate research scientist Gary Brucato of Columbia University's Department of Psychiatry said that psychiatric illness, like schizophrenia or psychotic mood disorders, is a risk factor for mass shooting but is given the undue emphasis that leads to fear and stigmatization.

Scientists suggest that other factors, such as legal problems, substance and alcohol use, and difficulty in coping with life events are more the useful foci for prevention and policy creation to prevent mass shootings.

RELATED ARTICLE: The Prevention of Mass Shootings: Are Researchers Focusing in the Right Place?

Check out more news and information about Mental Health in Science Times.