Earth's defense against the threats of meteorite impacts has taken another step ahead after NASA approved the continued development of the Near-Earth Object (NEO) Surveyor space telescope,

The telescope, which was launched after a successful mission review, aids NASA in detecting near-Earth objects (NEOs), which are asteroids and comets that pass within 30 million miles of the planet's orbit.

According to NASA, this comes as part of NASA's plans to discover at least 90% of all NEOs greater than 140 meters (459 feet) in size, with roughly 40% of them being discovered so far. 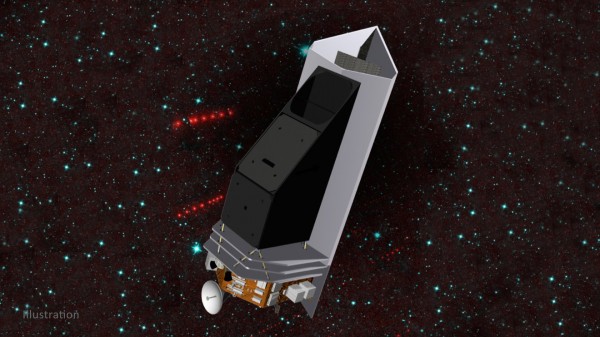 (Photo: NASA/JPL-Caltech)
NEO Surveyor is a new mission proposal designed to discover and characterize most of the potentially hazardous asteroids that are near the Earth.

"Each night, astronomers across the globe diligently use ground-based optical telescopes to discover new NEOs, characterize their shape and size, and confirm they do not pose a threat to us," Kelly Fast, program manager for NASA's NEO Observations Program, said in a statement on NASA's website.

"Those telescopes are only able to look for NEOs in the night sky. NEO Surveyor would allow observations to continue day and night, specifically targeting regions where NEOs that could pose a hazard might be found and accelerating the progress toward the Congressional goal."

What Is DART Mission's Mission?

The consequences of a huge near-Earth object colliding with our planet might be severe, if not outright apocalyptic. As a result, maintaining awareness of all NEOs, as well as finding multiple means to potentially mitigate such an impact, should one be required, is critical.

The Double Asteroid Redirection Test (DART) Mission, which is also part of NASA's Planetary Defense Coordination Office's efforts, proposed shooting a rocket at a near-Earth object to use speed and impact to shift an asteroid's trajectory ever so slightly, enough to knock it off course.

Or, to put it another way, striking it with a rocket fast enough to modify its course by a fraction of a percent.

The DART Mission will be tested later this year, Fox News said. The specialized spacecraft being launched and guided target a faraway near-Earth object in the Didymos system, posing no threat to Earth. By September 2022, it is expected to arrive and complete its mission.

This would be humanity's first true encounter with a near-Earth object. This scenario had previously only been seen in science fiction. It's a hallmark of the genre there, and nuclear weapons are frequently used to destroy it.

The concept is breathtaking to consider, and it would create an excellent picture for science fiction films.

However, in reality, the concept is not great at best and potentially disastrous at worst. This is because destroying a near-Earth object will produce smaller pebbles that will most likely continue on their path towards our planet. Even if they manage to penetrate Earth's atmosphere, the devastation they may do would be catastrophic.

In early 2016, NASA established the Planetary Defense Coordination Office. The department aims to provide "timely and reliable information to the government, the media, and the public about potentially hazardous objects (PHOs) approaching Earth and any potential for impact."

Nonetheless, this planetary defense office exists because a large impact is unavoidable at some point. That's unless scientists build technologies to successfully deflect threatening objects like what researchers and spacecraft engineers from the US, Europe, and around the world did, per Europea Space Agency.

A near-Earth object measuring 120 feet (37 meters) in diameter entered the atmosphere on June 30, 1908, and burned up over forested Siberia. The resulting shockwave dubbed the "Tunguska Event," mowed down trees. Planetary Science Institute claims people were "thrown into the air" from a distance of 20 kilometers. Meanwhile, NASA narrated that a man was thrown from his chair forty miles distant by the blast.

NASA and other organizations have discovered much larger asteroids, and hence far more deadly, than the Tunguska asteroid. NASA's Center for Near-Earth Object Studies searches the skies for asteroids and comets that "enter Earth's neighborhood," or come within 45 million kilometers (about 28 million miles) of Earth's orbit, using large telescopes.

"Potentially hazardous asteroids" are the rocks that are of considerable concern. This indicates they're around five million kilometers away from Earth. (For comparison, the moon is 238,855 miles away on average.)

The majority (almost 90%) of the big boys, or rocks larger than one kilometer (0.6 miles), have been discovered by NASA. That included the roughly six-mile-wide behemoth that killed out the dinosaurs, which Planetary Science Institute said. There are still a lot of dangerous pebbles around. According to NASA's planetary defense agency, two out of every three NEOs broader than 460 feet - boulders at least three times the size of Tunguska - have yet to be discovered.

Even much smaller rocks, measuring less than 30 feet (10 meters), can be dangerous, as the surprise 56-foot (17-meter) rock that detonated above Russia in 2013 demonstrated.

With the help of the near-Earth object telescope, astronomers are now a step closer to finding these rocks. Experts claim, however, that there is still a lot of stuff out there.