New evidence claims some moons from a large population of rogue exoplanets may have both atmospheres and liquid water. Thanks to the mix of cosmic radiation and tidal pressures imposed on the moon by its planet's gravitational attraction.

While cataloging exoplanets in general, let alone exoplanets that aren't hitched to a star, surveys have found candidates by looking at the gravitational effect that these exoplanets should have on distant sunlight.

According to these observations, each star in the Milky Way may have at least one rogue Jupiter-sized gas giant exoplanet. 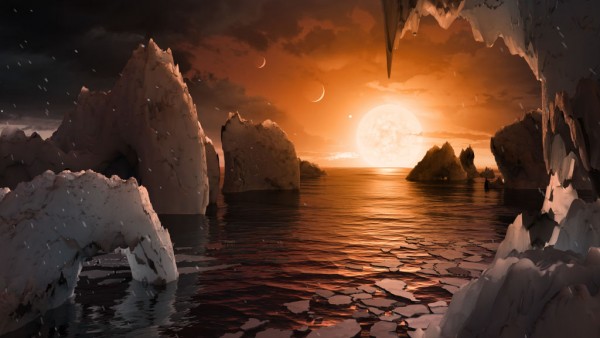 (Photo: Photo digital Illustration by NASA/NASA via Getty Images)
UNSPECIFIED: In this NASA digital illustration handout released on February 22, 2017, an artist's concept allows us to imagine what it would be like to stand on the surface of the exoplanet TRAPPIST-1f, located in the TRAPPIST-1 system in the constellation Aquarius.

Most life on Earth depends on a food web built on the foundation of photosynthesis - that is, it requires the Sun's light and heat to exist. This heat is also responsible for keeping the water on the Earth's surface liquid, which is essential for life as we know it.

There are still regions where liquid water can be discovered beyond the Solar System's frost line, which is predicted to freeze. These are Jupiter's ice moons Ganymede and Europa, as well as Saturn's ice moon Enceladus.

These moons have liquid seas beneath their ice shells. Experts believe these are kept by freezing by internal heat generated by the stretching and squeezing caused by the planets' gravitational field as the moons orbit.

As a result, Science Alert said Europa and Enceladus are assumed to be home to life. However, despite being away from sunlight, there is one form of ecosystem on Earth that does not rely on the photosynthetic food web. Hydrothermal vents are where heat and chemicals escape from the Earth's center and into the ocean depths.

Bacteria that harness energy from chemical processes thrive around these vents, and other creatures can feed on them, creating a new food web that doesn't rely on sunshine.

ALSO READ: Traces of an Exomoon from a Different Galaxy Detected

As a result, a group of scientists led by astronomer Patricio Javier vila of the University of Concepción in Chile attempted to predict the likelihood of exomoons orbiting rogue gas giant exoplanets.

Over the system's evolutionary history, an exoplanet the mass of Jupiter housing an exomoon the mass of Earth with an atmosphere composed of 90% carbon dioxide and 10% hydrogen.

Their findings show that a large amount of water can be generated and preserved in liquid form in the exomoon's atmosphere.

The fundamental engine of chemical kinematics to convert hydrogen and carbon dioxide into the water would be cosmic radiation. This would create 10,000 times less water than the oceans on Earth, but 100 times more than the atmosphere - enough for life, according to the researchers.

The heat required to keep the water liquid would be generated by tidal forces generated by the exoplanet's gravity. Carbon dioxide in the exomoon's atmosphere could add even more heat, creating a greenhouse effect that could help maintain the world temperate.

"The presence of water on the surface of the exomoon, affected by the capability of the atmosphere to keep a temperature above the melting point, might favor the development of prebiotic chemistry," the researchers wrote in their paper.

"Under these conditions, if the orbital parameters are stable to guarantee a constant tidal heating, once water is formed, it remains liquid over the entire system evolution, and therefore providing favorable conditions for the emergence of life."

Experts published their study, titled "Presence of Water on Exomoons Orbiting Free-Floating Planets: A Case Study," in the International Journal of Astrobiology.

RELATED ARTICLE: Exomoons May Be Showing Signs Of Surface Life Due to Thawing