China's Tiangong space station, which is currently under construction, has welcomed its first crew members. Three taikonauts (astronauts) joined the Tianhe core space station module in orbit, marking a new milestone in China's emergence as a space power. While the Shenzhou-12 mission's launch is notable in and of itself as a demonstration of China's space program, it also illustrates mounting concerns about China's space ambitions. 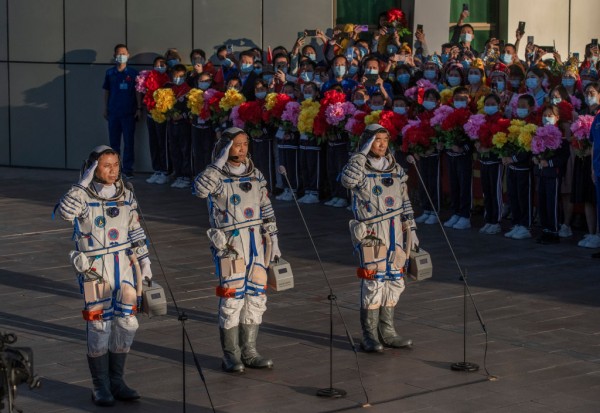 (Photo: Kevin Frayer/Getty Images)
JIUQUAN, CHINA - JUNE 17: Chinese astronauts from China's Manned Space Agency, left to right, Tang Hongbo, Nie Haisheng, and Liu Boming salute at a departure ceremony before launching of the Shenzhou-12 at the Jiuquan Satellite Launch Center on June 17, 2021, in Jiuquan, Gansu province, China. The crew of the Shenzhou-12 spacecraft will be carried on the Long March-2F rocket launched to the space station China is building from the Gobi Desert marking the country's first manned mission in nearly five years.

The crew successfully docked with the Tianhe module in low Earth orbit (LEO) at an altitude of roughly 236 miles seven hours after launch. SpaceFlightNow said Commander Nie led the three-person crew into the Tianhe core module of the space station at 6:48 a.m. EDT (1048 GMT). As the complex soared some 235 miles (380 kilometers) above Earth, astronauts Liu Boming and Tang Hongbo followed Nie into the Tianhe module through hatches leading from their Shenzhou 12 spaceship.

After taking a few moments to settle in, the astronauts declared that they had arrived safely at the half-built Tiangong station and saluted officials on the ground. The event was tape-delayed and broadcast on Chinese state television.

The Chinese astronauts will spend three months on the Tianhe, bringing the module online and testing its systems in preparation for future crewed missions. After that, China will add other modules to the Tianhe. The country will also expand the Tiangong space station in the following tasks later this year.

Commander Nie said that the trip will be challenging but will contribute to establishing a Chinese space station. "We need to set up our new home in space and test a series of new technologies. So, the mission is tough and challenging. [But] with the three of us working closely together, doing thorough and accurate operations, we can overcome our challenges. We have the confidence to complete the mission," Nie said in a statement translated by the BBC.

Shenzhou-12 is the Tianhe module's second trip after it was sent into orbit. In May 2021, an unmanned supply flight docked with the module, with two further launches later that year, the unmanned Tianzhou-3 and the piloted Shenzhou-13.

The Tianhe core module, which is 54 feet long and 14 feet in diameter, was launched into orbit in April 2021, BBC reported. It contains living quarters for up to three crew members, power, propulsion, navigation, and other systems for the entire Tiangong space station, which is expected to be completed by 2022. However, the whole module contains only 1765 cubic feet of space for all of its equipment and systems, as well as three crew members, making the taikonauts' three-month stay very basic in terms of living quarters.

Aside from the Tianhe module, the Mengtian and Wentian laboratory cabin modules will be added to the Tiangong space station in subsequent flights scheduled for 2022. Both modules will improve the station's navigation, propulsion, and orientation capabilities. Chinese state media said these features would allow crew members to conduct scientific and technical experiments. Furthermore, China wants to launch a companion space telescope capable of independent orbit and docking with Tiangong and will have a viewing angle hundreds of times larger than the Hubble Space Telescope.

The Tiangong space station will have a mass of around one-sixth of the ISS and a length of about 60 feet when completed. There are just 3,884 cubic feet of habitable space on the entire station, accommodating three people. Tiangong is around the same size as Russia's decommissioned Mir space station or the United States' first space station, Skylab. Both space stations had a maximum crew of three people.

The Shenzhou-12 mission follows a string of recent notable achievements for China's space program. China successfully obtained lunar soil and minerals collected by its Chang'e 5 lunar rover to Earth in late 2020. In addition, China successfully landed the Zhurong rover on Mars in May 2021 for a 90-day mission that includes sampling the red planet's surface and atmosphere.