Snakes Use Their Forked Tongues to Smell, Scientist Reveals

Snakes have an unusual tongue that could give creep out many people. Every so often, they would wave their forked tongues around rapidly and then retracts it.

But the serpent's forked tongue is one of nature's wonders that has intrigued humankind for thousands of years. Although many theories have surfaced throughout the past centuries, their function remained obscure.

Evolutionary biologist Kurt Schwenk, a professor of ecology at the University of Connecticut, discusses the real function of the forked tongue of snakes in his article in the conversation via the SciTech Daily. 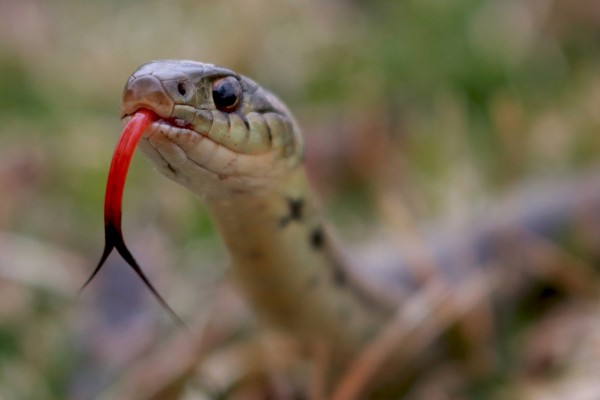 Theories About the Function of Snakes' Forked Tongues

Theories explaining the forked tongues of snakes have been around for thousands of years. For instance, Aristotle believed that the forked tongues of snakes provide them a "two-fold pleasure" from taste. This was mirrored by French naturalist Bernard Germain de Lacépède, who said that the tongue could adhere more closely to the tasty body of their prey.

Moreover, 17th-century Italian astronomer Giovanni Hodierna thought that snake tongues are used to cleaning the dirt in their noses since they are always groveling in the soil.

Meanwhile, during the 19th century, French naturalist Jean-Baptiste Lamarck stated that snakes use their tongues to feel their surroundings. For him, the forked tongues of snakes function as an organ of touch. His theory remains popular until the end of the century.

Snakes Smell with their Tongues

It was only in the 1900s that the real function of the forked tongues of snakes has been discussed. Scientists turned their attention to the two bulblike organs that are located above the palate of the snakes.

These are known as Jacobson's or vomeronasal organs. In Schwenk's paper, Of tongues and noses: chemoreception in lizards and snakes, he wrote that these organs open to the mouth through a tiny hole in the palate. Vomeronasal organs are only found in land animals but not in most primates.

Scientists found that vomeronasal organs are lined with the sensory cells that send an impulse to the brain as the nose and that the tip of the forked tongues of snakes ended up inside the vomeronasal organ. This means that the tongues are used to collect and transport odor molecules.

In a 1994 article by Schwenk, he used film and photo evidence to show when snakes capture and sample odor molecules on the ground. They observed that the two tips of the snake's tongue function the same way as to why humans have two ears.

He said that the two tips provide snakes with the directional or stereo smell with every flick, a very useful skill when following scent trails left by potential prey or mates.

RELATED ARTICLE: Not All Birds Can Fly, but There's One Snake That Can

Check out more news and information on Snakes on Science Times.