Happiness in Urban Green Spaces: Better Than In Economically Developed Ones?

A new study reveals that the more economically developed a city becomes, the happiness of its citizens becomes more directly correlated to the area of urban green spaces.

Researchers from the Korea Advanced Institute of Science and Technology (KAIST), led by Professor Meeyoung Cha of the School of Computing, studied the relationship between green spaces ad citizen happiness by analyzing satellite imagery datasets of 60 different countries.

They published the full findings of their study, entitled "Urban green space and happiness in developed countries," in the journal EPJ Data Science. 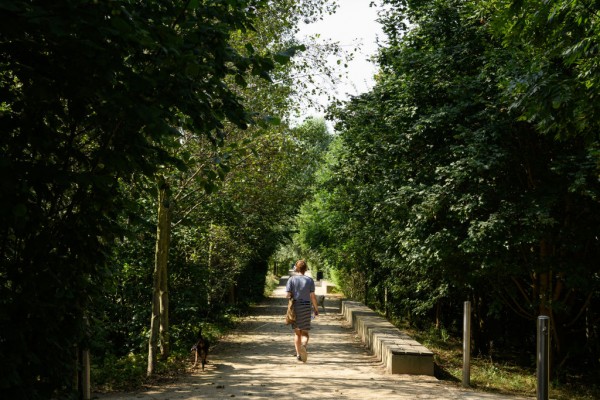 (Photo : Getty Images)
A woman walks along one of the many wooded boulevards within the Queen Elizabeth Olympic Park on July 17, 2019 in London, England. On July 22, London will officially become the world's first national park city, following a six year campaign started by former geography teacher Daniel Raven-Ellison. The aim of the declaration is to ensure that everyone has access to nature, can breathe cleaner air, live in affordable green homes and swim in safe rivers. The group behind the project will publish a "Universal Charter for National Park Cities", in the hope that other major cities around the world follow London's example. (Photo by Leon Neal/Getty Images)

The Link Between Happiness and Urban Green Spaces

However, the lack of data had been the main concern in carrying out further studies as most previous research was conducted in affluent parts of the world, such as the US and in Europe.

Challenges in gathering data and measuring green space have left the question of the possible positive effects of green spaces on mental health open and unanswered for many countries with different socioeconomic conditions.

But researchers from KAIST used the Sentinel-2 satellite imagery dataset to measure every country's urban green spaces as the total vegetation index per population in the most populated cities. They chose 90 cities from 60 countries to represent 10% of the studied countries.

ALSO READ: Walk in the Park May Help Alleviate Stress

They analyzed the satellite imagery dataset from summertime, which is June to September for countries in the Northern hemisphere and December to February in the Southern Hemisphere. They used the happiness score from the World Happiness Report of the UN.

The team also examined the 30 wealthiest countries and found that economic prosperity is crucial for happiness up to a certain level, but after that, urban green spaces are a better indicator of happiness.

The team said that the findings of their study could have implications on the policy of each country, Science Daily reported. First, public green spaces must be accessible to citizens to enhance social support. Without that, the positive role of social support on happiness might diminish.

Second, both developed and developing countries must have proper urban planning for urban green spaces, especially where new cities and suburban areas are rapidly expanding.

Third, more attention must be paid to predict climate change and its impact on the maintenance of urban green spaces.

Researchers noted that the tool they developed for this investigation can also be used to quantify aquatic environments and their possible effects on citizen happiness in future studies.

Check out more news and information on Green Spaces in Science Times.