9,000-Year-Old Stone Tool Found in Lake Huron; Marks The Oldest Obsidian Discovered in the East US

A 9,000-year-old stone tool artifact was recently found by a team of underwater archaeologists, believed to have originated from a quarry in what is now central Oregon — a location 2,000 miles away.

The discovery, which contains obsidian flakes, marks the oldest and farthest eastward confirmed samples of western obsidian in the continental United States. Details of the discovery are detailed in the report "Central Oregon obsidian from a submerged early Holocene archaeological site beneath Lake Huron," appearing in the PLOS ONE journal. 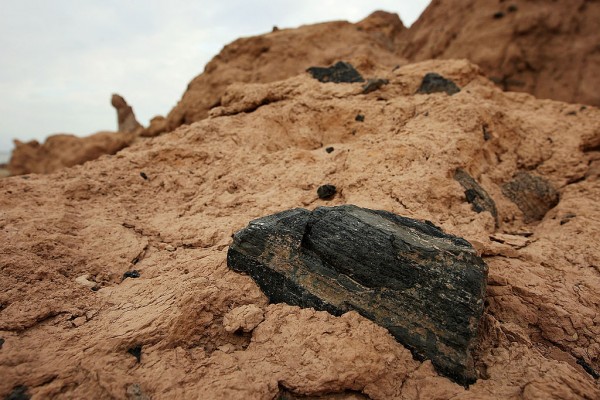 (Photo: Photo by David McNew/Getty Images)
CALIPATRIA, CA - JULY 6: Obsidian, volcanic stone valued by native Americans for millennia for making arrowheads and spear tips and for trading with other tribes, are seen scattered around Red Hill on July 6 near Calipatria, California. Red Hill is one of the four Salton Buttes, small volcanoes on the southern San Andreas Fault, at the Salton Sea. Scientists have discovered that human-created changes affecting the Salton Sea appear to be the reason why California's massive "Big One" earthquake is more than 100 years overdue and building up for the greatest disaster ever to hit Los Angeles and Southern California.

Obsidian Artifacts: Clues to the Past in North America

"In this case, these tiny obsidian artifacts reveal social connections across North America 9,000 years ago," said Ashley Lemke, an assistant professor of sociology and anthropology at the University of Texas at Arlington, from the University's press release. "The artifacts found below the Great Lakes come from a geological source in Oregon, 4,000 kilometers away--making it one of the longest distances recorded for obsidian artifacts anywhere in the world."

The report details the discovery of a pair of obsidian flakes underneath Lake Huron, with both pieces "conclusively attributed" to the Wagontire obsidian source in Oregon.

Since the site of the discovery was largely undisturbed underwater, researchers were able to systematically recover the obsidian sample. Obsidian is a naturally-occurring volcanic glass that has found wide use both as an important material for blades and sharpened weapons, as well as a traded commodity prized for its black sheen.

The Importance of Finding Obsidian in the Eastern US

Lemke is recognized as a pioneer in the field as the chair of the Advisory Council on Underwater Archaeology, an international group dedicated to discovering traces of history left in the underwater environment and the preservation of related cultural resources. Her expertise includes submerged sites in the Americas, including those near the Atlantic Ocean and the Gulf of Mexico.

She additionally explains that the shards, despite their small sizes, have "very large stories to tell," especially since obsidian from the western part of the US is rarely found on the other end. This particular find in Lake Huron is a part of a larger, ongoing study to understand the social and economic setup of caribou hunters who roamed the land at the end of the ice age.

Researchers also discovered that water levels were most likely lower than they are now, finding ancient walls and hunting blinds now a hundred feet underwater. Lemke notes that her specific discovery is "exciting" as it stresses the importance of underwater archaeology. Underwater, cultural, and historical sites are better preserved than they are on land.