When comet 46P/Wirtanen passed by Earth in December 2018, it should have summoned a designated driver.

According to study, scientists who looked carefully at the comet's flyby discovered that it left a staggering amount of alcohol in its wake. Other molecules in a comet's trail usually outnumber alcohol. The scientists who discovered it say it will help them learn more about the chemical composition of the solar system's early days. Not to mention that this comet definitely knows how to have a good time. 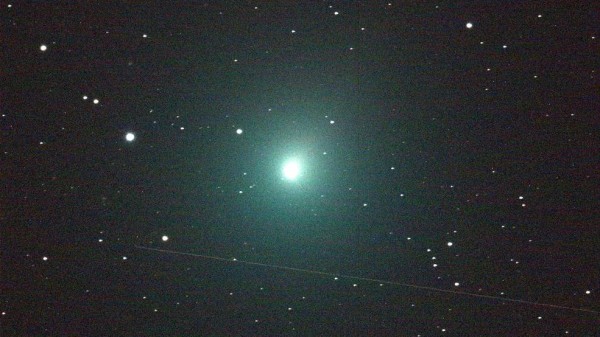 (Photo : NASA)
Comet 46P/Wirtanen made its closest approach to Earth on December 16, 2018. Because of its holiday timing and bright green glow, the icy visitor was nicknamed the ʻChristmas Comet.’ 46P/Wirtanen was just 7.1 million miles from Earth, or 30 times the distance to the moon, which is the closest the comet had ever been to our planet in centuries.

"46P/Wirtanen has one of the highest alcohol-to-aldehyde ratios measured in any comet to date," Johns Hopkins University cometary scientist and study coauthor Neil Dello Russo said in a press release.

The study, titled "First Comet Observations With Nirspec-2 at Keck: Outgassing Sources of Parent Volatiles and Abundances Based on Alternative Taxonomic Compositional Baselines in 46p/Wirtanen," in The Planetary Science Journal.

In addition to the surprisingly high proportion of alcohol, the scientists discovered the normal constituents of comets such as formaldehyde, ammonia, acetylene, and water. You would not want to play drinking games with good ol' 46P/Wirtanen because the alcohol in question was the toxic methanol.

Because your body reacts differently to different types of alcohol, you won't get intoxicated like you would if you drank ethanol. Instead, the human digestive system converts methanol to formic acid, implying that you ingested carpenter ant venom, which can result in blindness, unconsciousness, and death.

The simplicity with which scientists identified the comet, thanks to recent enhancements to the Near-Infrared Spectrograph at the Keck Observatory, is even more surprising than the comet's odd makeup (NIRSPEC). Chemical study of a comet typically takes hours, which may be excessive given how swiftly some of these objects pass by. NIRSPECT, on the other hand, dramatically reduced that time.

"Within just 10 to 20 minutes of observing with NIRSPEC," study coauthor and University of Missouri-St. Louis researcher Mohi Saki said per Phys.org, "we obtained measurements of the abundances and spatial distributions of the comet's chemical building blocks."

Dirty Snowball On A Comatose

That was not the only strange thing they discovered about Wirtanen. Comets are frosty balls of frozen gases, pebbles, and dust known as "dirty snowballs". The ice is heated by the heat of sunlight falling on a comet's nucleus as it travels by the Sun. Because the liquid phase is impossible to achieve in the absence of an atmosphere, once a specific type of ice melts, it sublimates, converting to a gas and forming a coma around the comet.

The coma is supposed to cool as it goes further away from the nucleus, similar to how air cools as it expands. However, Wirtanen's coma barely cooled at all. "There may be solid chunks of ice flying off 46P/Wirtanen. We've seen this in some comets visited by spacecraft," Professor Erika Gibb of the University of Missouri-St Louis said per IFL Science.

Ice Chunks Could Have Caused Coma To This Drunken Comet

The authors do not know what was heating up the coma's highly dispersed molecules. Still, they propose two possibilities for additional investigation. Gibb said ice chunks may be blowing off 46P/Wirtanen in large quantities. This has been observed in certain comets that have been visited by spacecraft. Witanen, per researchers, had a magnificent explosion at the moment. NASA said those ice chunks fall away from the nucleus and sublimate convert to gas, releasing energy into the coma.

Alternatively, when sunlight ionizes molecules in the coma, high-energy electrons are released, which warm up other molecules when they collide.

Other Chemicals Caused The Coma

Unfortunately for those expecting to turn Wirtanen into the ideal space party location, the alcohol identified was methanol rather than ethanol, which would render you blind in a negative sense. Formaldehyde and hydrogen cyanide were also identified in its coma, which is fortunate because they are millions of times too diffuse to harm us.

If a hot, intoxicated comet circling the inner Solar System and behaving erratically sounds frightening, take heart: Wirtanen never crosses Earth's orbit. Its closest approach to the Sun is 5% farther away, and its elongated orbit brings it all the way to Jupiter.