By monitoring one of Japan's most active volcanoes, researchers have discovered an invisible telltale sign - small spikes in electrical activity that hints at impending eruptions.

The peninsula of Sakurajima, whose name literally translates to "Cherry Blossom Island," is an active stratovolcano located in the southernmost part of Japan. As one of its most active volcanoes, a former island connected to the neighboring peninsula after its lava flowed in 1914 hardened and became land.

An international study analyzed 97 recorded explosions from Sakurajima, starting from June 1 to 7, 2016, comparing the condition of the volcano when visible lightning appears over it and when it creates mysterious and invisible electrical activity around it. Their findings appear in the latest Geophysical Research Journals, in the article "Impulsive Volcanic Plumes Generate Volcanic Lightning and Vent Discharges: A Statistical Analysis of Sakurajima Volcano in 2015." 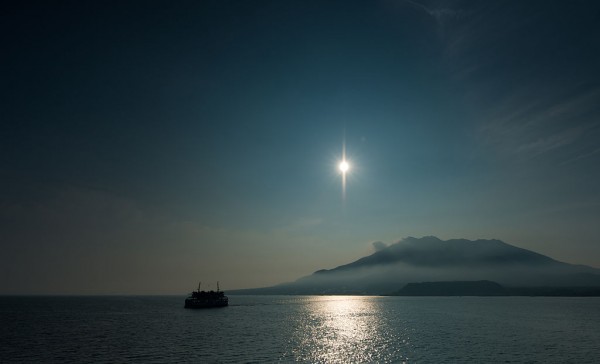 (Photo: Photo by Keith Tsuji/Getty Images)
KAGOSHIMA, JAPAN - AUGUST 11: A general morning view of Sakurajima and the ferry on August 11, 2016, in Kagoshima, Japan. Mt. Sakurajima, an active volcano that just had an explosive eruption spewing volcanic ash 5,000 meters into the sky on July 26, 2016, is located within 10 km of Kagoshima city with a population of 606,000. Kagoshima residents lead their daily lives as this volcanic mountain has recorded 47 explosions this year and has been on an alert level of "3" since February 2016, which closes off the entire mountain.

READ ALSO: Drones Save Lives By Diving Into Volcanoes - For Science

An Interaction Between Fire and Lightning

The invisible spikes in electrical activity surrounding a volcano are technically called vent discharges, and they usually occur early in eruptions. This very nature has led researchers to study whether they can actually be used as some early warning system against impending eruptions. According to a 2018 article from the Harvard Astrophysics Data System, vent discharges are different from other types of volcanic lightning since it happens at high rates - about a thousand to tens of thousands per second - and lasts for a couple of seconds, often related to the duration of the eruption. Additionally, these vent discharges are known to generate a continual radio frequency signal.

Additionally, researchers who worked on Sakurajima noted that volcanic lightning could be induced by silicate charging, which occurs when silicate materials from rocks in a volcanic eruption break apart and when they come into contact with each other in the middle of the turbulent plume. Also, when the ash particles rub together after being ejected, they exchange electrons which creates an imbalance in the positive and negative charges. In a natural attempt to neutralize this imbalance electrical field, a bolt of lightning zaps through the charged clusters.

"So if you're seeing volcanic lightning, you can be pretty confident in saying that the eruption has ash," summarizes Cassandra Smith, one of the authors of the study and a volcanologist from the Alaska Volcano Observatory in Anchorage, in an article from online publication Science News.

Tracking Vent Discharges and What They Tell About Sakurajima

Also, what sets vent discharges from other forms of volcanic lightning is that these are relatively new in the fields of volcanology. To track them, researchers focused on small explosions from the Japanese stratovolcano, defined as events that only have plume heights of 3 kilometers or less and lasting for less than five minutes. They examined different parameters such as the presence of silicate charging, plume dynamics in Sakurajima, and the connection between the presence of vent discharges and volcanic lightning.

Sure enough, volcanic lightning occurred in plumes that contained ash. On the other hand, vent discharges were limited to ash-filled plumes with volcanic lightning propelled into the sky at velocities more than 123 miles per second (55 meters per second). A way to monitor these vent discharges, as the case with Sakurajima, could help scientists spot volcanic eruptions that contains a lot of ashes.