NASA's Ingenuity Mars Helicopter: First Time to Usher Perseverance in Hunting for Ancient Signs of Life at the Jezero Crater

On Monday, engineers pushed NASA's Ingenuity's limits further than ever as it ushered the Perseverance rover in its quest for ancient signs of life at Mars' Jezero Crater.

According to a The Verge report, in 166 seconds, Ingenuity flew approximately roughly 11 mph for nearly a half-mile, or 2,500 feet, a far longer distance compared to its recent flight last month, which calculated 525 feet.

The copter buzzed around Séítah's different corners and captured images of its borders, where junctures between various formations of rocks, also known as contacts, in geology language, make for some of the most scientifically interesting targets in the hunt of Perseverance for ancient signs of life.

The Séítah regions on the Red Planet, filled with rocks and sand dunes, were too treacherous for the Perseverance rover of NASA to drive through. 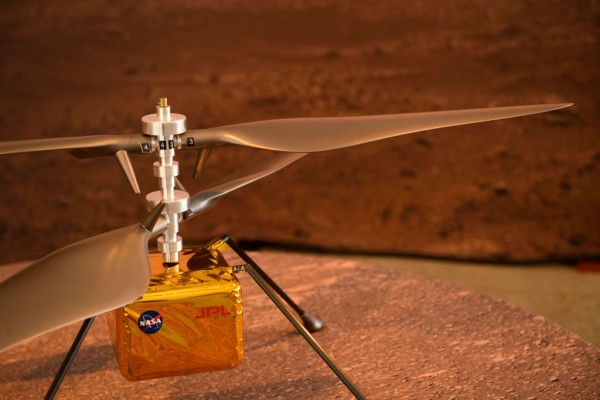 (Photo : PATRICK T. FALLON/AFP via Getty Images)
A full scale model of the experimental Ingenuity Mars Helicopter, which will be carried under the Mars 2020 Perseverance rover, is displayed at NASA's Jet Propulsion Laboratory (JPL) on February 16, 2021 in Pasadena, California.

NASA's Ingenuity is a small helicopter that accompanies the rover, flew over the site on Monday, and snapped some images of a key spot on the opposite side.

In less than three minutes, this report specified, Ingenuity spared Perseverance the months it would need to spend driving to capture its own images.

The rapid Monday morning jump through Séítah was the ninth flight of Ingenuity on Mars so far, although it marked the first time the chopper lent a helping hand to Perseverance in its hunt for fossilized signs of life at the Jezero Crater of Mars described by NASA as Perseverance rover's landing site.

This four-pound helicopter arrived on the Red Planet on February 14, 2021, attached to the underside of Perseverance, and turned out to be the first object to take powered flight on another world in April.

The photos of Ingenuity, expected in the coming days after roving down a deferred Mars-to-Earth data pipeline, will help the Jet Propulsion Laboratory of NASA decide whether to send Perseverance on a path to scoop up samples of rock in that specific contact region.

Such a mission is developed to be high risk, high reward. Meaning, it makes sense for the engineers to take those added risks due to the potential payoffs.

A similar UPI report specified that Ingenuity originally devised to fly on short trips from point A to B, dipped into one of the eroded craters of Séítah, slowed its speed, then rose slopes for the first time, while moving along a zig-zagged path.

The autonomous navigation algorithms of NASA's Ingenuity were written to anticipate over only flat terrain. Therefore, engineers tweaked the code and convinced the helicopter that the bumpy features of Séítah were flat.

That necessitated several simulations to prepare for the flight, mainly to forecast if the helicopter could possibly spin out of control under its new flight directions.

No accidents took place, and successfully, Ingenuity reached the targeted formation of rocks on the opposite side of Séítah.

Related information about Ingenuity helicopter is shown on iGadgetPro's YouTube video below: