San Andreas Fault: What Will Happen If It Breaks? When Will the Next California Earthquake Happen?

The existence of the San Andreas fault was brought intensely to world attention in 1906 when abrupt displacement along the fault produced the great earthquake and fire in San Francisco.

According to the US Geological Survey, the earthquake, nevertheless, was one of the many caused by episodic displacement along the fault all through its life of approximately 15 to million years.

Essentially, scientists have learned that the crust of Earth is fractured into a series of plates that have been quite slowly moving over the surface of the Earth for millions of years.

Two of these moving plates meet in western California; the boundary in-between is the San Andreas Fault. Specifically, the Pacific Plate on the west is moving northwestward associated with the North American Plate on the east, leading to earthquakes along the fault.

ALSO READ: Why the California Earthquakes Were Back-to-Back 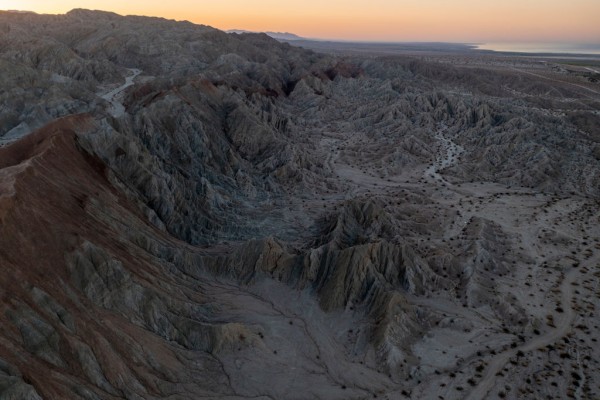 (Photo: David McNew/Getty Images)
In an aerial view from a drone, colorful minerals are seen on the Pacific Plate side of the San Andreas Fault, where it collides with the North American Plate in the southwestern section of the Mecca Hills on April 2, 2021, near Mecca, California.

What Will Happen If San Andreas Fault Breaks?

A Newsweek report specified, the effect of the "northern big one" would be tremendous. Meaning, the San Andreas is running right through San Francisco. Essentially, it is near to San Francisco than it is to Los Angeles.

Downtown San Francisco, the said report showed, is vulnerable; some of the oldest buildings survived by shaking back in 1906, although that does not mean they'd be safe in the coming earthquakes by any means.

A lot of the buildings are constructed near the fault and on the sort of soft ground that potentially liquefy. Meanwhile, a southern Big One would possibly strike a little further away from the center of Los Angeles, so the effect may be smaller.

LA, on the other hand, has a lot more stuff to beak compared to San Francisco; a lot of it is quite old. Therefore, possibly, the nest expectation is the same as the north and south.

More commonly, there are many disasters that arise from an earthquake's strong shaking. It would surely lead to landslides and conceivably chemical spills.

When is the Next Big California Earthquake?

Recent video descriptions have specified, like the one posted on Madison.com, the Pacific Northwest, lying precariously atop the San Andreas Fault line, will one day see "untold damage" like earthquake tears through homes and cities, but the big question is "When?"

Dr. Husker said they were just surprised that it seems like "it should have happened." The seismologist added they have no methods for forecasting at this point, there are many different works that have been done and tested over the past, and he said he thinks people have humbled.

The same video posted on Breaking One showed while California's devastating earthquake is expected, the seismologist explained, some people believe a permissive-faire attitude is more advantageous.

And, even though it could be a matter of minutes before the big one is spotted, Dr. Husker has insisted preparation is possible. More so, the minute a slight tremor is felt, a lot of people will feel an abrupt wave of anxiety, feeling it will be the "big one."