Mysterious Signal From Space: Did This Galactic Gamma Ray Burst Arrive on Time?

Astronomers and even ordinary people have been waiting for a sign from space from an advanced alien society for millennia. If someone is genuinely present from outer space, logic dictates that they would be willing to say "Hello!" from time to time with the help of a soft gamma repeater.

A recent scientific finding gives us new hope that someone from deep space is finally trying to contact us. In April of last year, two ground-based telescopes detected a millisecond-long fast radio burst (FRB). Even so, it was significant enough to be called a breakthrough. 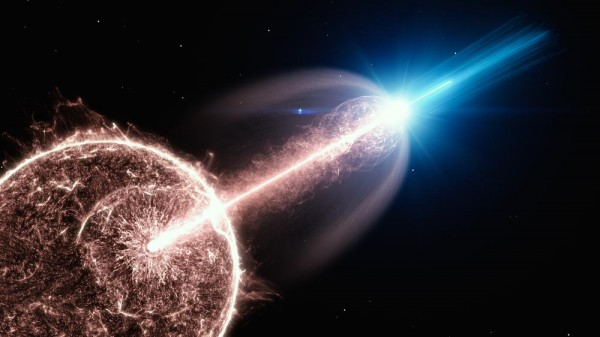 Closest FRB In History Yet

Survey for Transient Astronomical Radio Emission 2 (STARE2) and the Canadian Hydrogen Intensity Mapping Experiment (CHIME) discovered the newest FRB, called FRB 200428. It is a one-of-a-kind signal since it is the first one detected by scientists to originate from within our own Milky Way galaxy. The signal was nearly impossible to miss because it was just roughly 30,000 light-years away from Earth.

"CHIME wasn't even looking in the right direction, and we still saw it loud and clear in our peripheral vision," Kiyoshi Masui, assistant professor of physics at the Massachusetts Institute of Technology, told Space.com.

There is another big plus here. Compared to all the other discovered fast radio bursts beyond our galaxy, the focus of this piece should be a lot easier for astronomers to investigate. The more distant a signal of this type is, the more difficult it is to analyze and track down its source.

A day before CHIME and STARE2 identified FRB 200428, the first detection of X-rays from that sky location was made. Multiple X-ray and gamma-ray bursts were recorded by the Neil Gehrels Swift Observatory and the Fermi Gamma-ray Space Telescope coming from SGR 1935+2154, which was previously known to show transitory radio pulsations.

A group of astrophysicists published a preprint, titled "Distinguishing Time Clustering of Astrophysical Bursts," on March 19. Astronomers observed a "periodic windowed behavior" in soft gamma bursts from SGR 1935+2154. They anticipated that these bursts would resume after a three-month break on June 1 following a three-month pause and might recur during four months.

The first fresh burst from SGR 1935+2154 was discovered on June 24, three weeks into the window of activity, following the projected three-month break. Almost a dozen more bursts have been observed subsequently, including one on July 6, the day the experts published the paper "Distinguishing Time Clustering of Astrophysical Bursts," in the journal Physical Review D.

Phys.org said the researchers were surprised and ecstatic when they verified their prediction. They believe this is a new example of a phenomenon known as periodic windowed behavior, which may describe emissions from other astronomical objects.

Researchers have proposed that distant galaxies' emission of rapid radio bursts, which typically last a few thousandths of a second, could be clustered in a periodic windowed pattern. However, the data was sporadic, and the statistical and computational methods needed to conclusively verify such a claim with sparse data were lacking.

Starquakes are theorized to be triggered by interactions between the neutron star's crust and its high magnetic field in soft gamma-ray bursts from magnetars. Magnetars spin every few seconds, and if the rotation is accompanied by a precession — a wobble in the rotation — the source of burst emission may only point to Earth within a narrow window. Another hypothesis, according to researchers, is that the magnetar is surrounded by a dense, revolving cloud of obscuring material with a hole that only permits bursts to escape and reach Earth periodically.

Obviously, scientists must do more work to determine the origins of the newest FRB. Still, speculation is the only choice until we get a definitive answer.