A Phys.org report specified that Di Costanzo, an edible insect entrepreneur, conducts cricket and mealworm cooking classes at her home in West London, where she raises the critters in a backyard shed with her husband, Tom.

Her business called Horizon Insects is part of what's described as the nascent edible insect scene of Europe, which features dozens of bug-based businesses that offer cricket chips in the Czech Republic, beetle beer in Belgium, and bug burgers in Germany.

The European Union headquarters in Brussels is supporting research and insect-based proteins as part of a more extensive sustainable food strategy, as similarly reported in The Balance Small Business site. 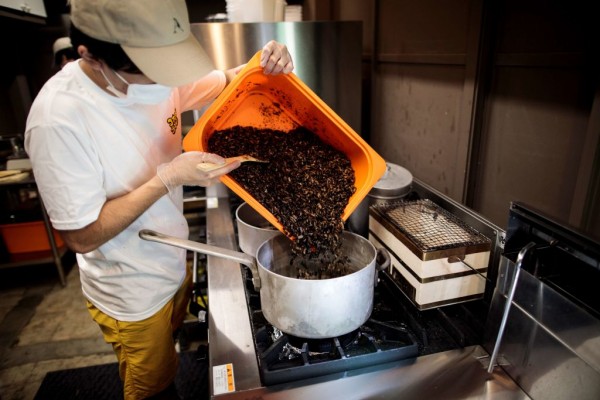 (Photo: BEHROUZ MEHRI/AFP via Getty Images)
Dried crickets are used as an ingredient as part of cricket ramen home-cooking kits at a kitchen in Tokyo.

The growing population of Earth puts more pressure on food production worldwide; insects are increasingly seen as a possible source of food. According to a study published in the Nutrition & Food Science International Journal, they are rich in protein, yet they can be raised much more sustainably compared to pork or beef.

Globally, two billion people in around 130 nations are eating insects regularly. The worldwide edible insect market is poised to boom, the investment bank Barclay specified, citing that data from meticulous research predicts it will increase from below $1 billion in 2019 to $8 billion by 2030.

However, despite all the European startups working to make insects appetizing, they should not be expected to start appearing at mainstream restaurants or on dining tables just yet.

One major reason is an intense cultural "yuck" factor in Western nations that Wageningen University's tropical entomologist Professor Arnold van Huis in the Netherlands said will be a struggle to change.

Van Huis said it is quite difficult to turn the minds of people around, although insects are undoubtedly safe to eat, maybe even more nutritious compared to meat products, with just risk coming from allergies since insects are closely linked to crustaceans like shrimp.

European production of insect-based food products is predicted to mushroom from 500 metric tons at present to 260,000 metric tons by 2030, Brussels-based lobby group International Platform of Insects for Food and Feed said.

As indicated in this report, insects need a tenth of the land, account for a portion of greenhouse gas or ammonia emissions, and need much less water compared to pigs or cattle, explained Huis.

The initial approval came earlier in 2021 for Tenebrio molitor larva, or dried yellow mealworm, following an application from Micronutris, a French insect farm.

The food safety regulators of the EU Commission said in a scientific opinion that mealworms are safe to eat, although they warned of possible reactions in those allergic to crustaceans or dust mites.

Regulators released another positive opinion this month for grasshoppers, based on an application from Netherland-based insect farming firm, Protix.

According to Kees Aarts, Protix CEO, which forecasted an explosion of food applications, their vision is that insects will go from "niche to normal."

Related information about edible insects is shown on the Insider's YouTube video below:

Check out more news and information on Insects in Science Times.