The world's richest man, Jeff Bezos, successfully completed his 10-minute spaceflight that costs $550 million per minute on Tuesday morning aboard Blue Origin's New Shepard rocket booster. He was joined with three others: his brother Mark Bezos and the oldest and youngest person to ever go to space: 82-year-old aviation pioneer Wally Funk and an 18-year-old Dutch student Oliver Daemen.

Bezos calls the mission a "tiny little step" in his mission to conquer the spaceflight industry as he announced his master plan to build a road to space that aims to move Earth's damaging industries to space to save it. He also announced that he had sold $100 million in tickets for two future spaceflights later this year. 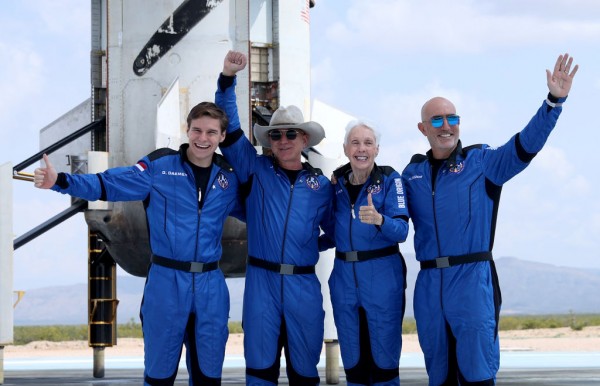 According to Daily Mail, the crew took off from Launch Site One in Van Horn, Texas, at 9:12 AM EST, which is 12 minutes behind schedule. The New Shepard rocket booster separated from their capsule at 9:16 AM EST and rose to 66 miles above Earth, just a few miles above Virgin Galactic founder Richard Branson's spaceflight.

The capsule then descended back to Earth on parachutes at 9:22 AM EST, and Bezos was first greeted by his mother Jacklyn and girlfriend Lauren Sanchez.

Bezos is the second billionaire to make his childhood dream of going to space come true. On July 11, Branson flew on his company's SpaceShipTwo spaceplane to space.

"We went right on up, and I saw darkness," the elated 82-year-old Funk said during the post-launch awards ceremony, as quoted by Vice. "I thought I was gonna see the world, but we weren't quite high enough, and I felt great."

Bezos posted a video of him and the three others while inside the capsule floating around. Daeman can be seen at an upside-down position at one point, and Bezos tossed Skittles at him.

The New Shepard rocket booster had 15 uncrewed spaceflights before, making this first crewed flight its 16th spaceflight. According to Vice, the NS-16 passengers were all awarded astronaut wings, which is a ceremonial rite of passage for all those who have flown beyond the boundary of Earth's atmosphere 50 miles up.

ALSO READ: Oldest Person on Blue Origin: 82-Year-Old Wally Funk Will Go to Space With Jeff Bezos; Who is She?

Bezos' Masterplan to Create a "Road to Space"

When CNN's Rachel Crane asked Jeff Bezos in an interview of what he thinks of critics saying that spaceflights are only joyrides for the wealthy, Bezos said he agreed on this but that it should also be used to solve the planet's problems.

He emphasized that Blue Origin's mission was to practice "operational space travel" so that it becomes comparable to airplane travel, therefore creating a road to space for the next generation to do amazing things there that would eventually help solve problems on Earth.

Bezos said that his goal is to move Earth's major industries that are damaging the planet to space in an effort to preserve the environment. The mission to make it like commercial airlines will help achieve this goal.