A new scan of the Milky Way by a multinational team of astronomers has found previously unseen signals with unparalleled sensitivity, as well as characteristics that hint at how stars develop and die. The group, which includes scientists from the Indian Institute of Science (IISc) in Bengaluru and the Indian Institute of Space Science and Technology (IIST) in Thiruvananthapuram, presented the findings a series of publications in Astronomy & Astrophysics.

The survey's data was acquired using two massive radio telescopes. One is the NRAO's Karl G. Jansky Very Large Array (VLA), and the other is MPIfR's Effelsberg 100m radio telescope as part of the GLOSTAR (Global View on Star Formation in the Milky Way) project. 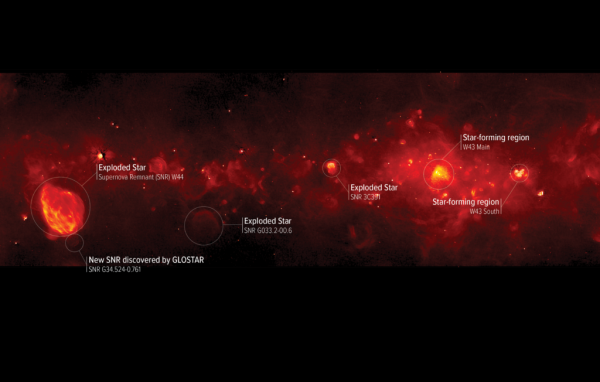 (Photo: Brunthaler et al., Sophia Dagnello, NRAO/AUI/NSF)
GLOSTAR image, using data from both the VLA and the Effelsberg radio telescope, shows a segment of the Milky Way's disk, revealing previously unseen tracers of massive star formation. Some of these features are identified in this version of the image.

The GLOSTAR team of researchers has published a series of publications in the journal Astronomy & Astrophysics presenting the first results of their study, titled "A Global View on Star Formation: The GLOSTAR Galactic Plane Survey." It included comprehensive investigations of numerous individual objects. The investigation is still ongoing, and more findings will be released later.

Researchers said the discovery of new supernova remnants (SNRs) in our galaxy. SNRs are structures produced from the catastrophic death of enormous stars.

Other teams found 270 SNRs, The New Indian Express said. All of which were detected by radio waves traveling through interstellar space. However, there are an estimated 1,000 SNRs in the Milky Way, implying that at least 700 SNRs remain undetected.

Other signs of star formation were discovered, including radio emission from methanol molecules in a nearby massive star-forming complex is known as Cygnus X. These are typically emitted from big stars in their early phases of creation. The team was also able to discover dense pockets of ionized hydrogen, which is another telltale evidence of the presence of massive newborn stars.

Young stars are frequently surrounded by dense clouds of dust and gas. Most optical telescopes do not show much because visible light is absorbed by the dense cloud that surrounds them. Radio transmissions, on the other hand, are what people are looking for.

"Since the GLOSTAR survey detects a wide range of radio emissions such as that from methanol molecules to ionised hydrogen, it is able to probe the formation of massive stars from very early to relatively late stages, which is important to get a complete picture of star formation in the Milky Way," researchers said per Times of India.

RELATED ARTICLE: What's The Shape of the Universe? Experts Say It Could be a 3-D Donut!