Shark Week is a documentary programming by Discovery Channel that airs every year in July or August. It is a week-long shark-related documentary, episodes, and movies that many Americans grew up with that it has become traditional fare for generations of would-be shark scientists.

Despite that, a new analysis showed that Shark Week is also deeply flawed, undermining its goals and potentially harming efforts of conservation of sharks, shark science, and shark scientists.

A team of researchers led by Dr. Lisa Whitenack, an associate professor of biology and geology from Allegheny College, performed a content and discourse analysis of over 200 Shark Week episodes, Phys.org reported. They noted that much of the public's perception of sharks are influenced by Shark Week. But this documentary programming, unfortunately, focuses on the negative portrayals of sharks and less on shark research or diversity of expertise in the field. 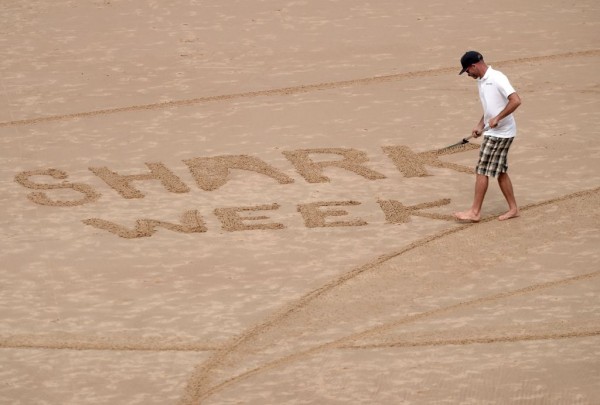 (Photo: Getty Images)
French plastic artist, Sam Dougados, draws a 50 meters shark with only a rake, in the sand of the "Cote des Basques" beach, during the Discovery Channel Shark Week, in Biarritz, on July 17, 2019. - The artist calls this field Beach Art as compared to Street Art. (Photo by IROZ GAIZKA / AFP via Getty Images)

The findings of their study were reported in the university's news release, which includes the following:

The team noted that Shark Week could have done better in promoting the conservation of sharks than their current standard by showcasing factual, accurate, and useful information about sharks, shark, science, and their conservation.

Shark populations and other species have been threatened due to the rapid human activities that threaten ocean-wide biodiversity. Due to that, not only are sharks affected, but various marine animal populations have also declined.

An analysis of threats for the globally distributed lineage of sharks, rays, and chimeras was published in the journal eLife in 2014. The paper has estimated a quarter of these chondrichthyan fishes are threatened based on the IUCN Red list criteria, with the large-bodied, shallow-water species being at greatest risk.

According to the IUCN Shark Socialist Group, the chondrichthyan extinction risk is higher than most other vertebrates, and only one-third of them are safe. Their populations have significantly declined throughout the ice-free waters on the planet, particularly in the Indo-Pacific regions and the Mediterranean Sea. Therefore, improved management and trade are urgently needed to prevent extinctions and help in conservation efforts.

RELATED ARTICLE: Sharks on Movies Are Overwhelmingly Portrayed as Villains, Making It Harder to Conserve Them

Check out more news and information on Sharks in Science Times.