At the recent International Coral Reef Symposium (ICRS), one of the studies presented is about a new model that would help map and monitor coral reef health across the South Pacific.

Using data collected from the Khaled bin Sultan Living Oceans Foundation's Global Reef Expedition, a team of researchers devised a new and innovative method that helps identify which natural and man-made factors could help coral and fish communities thrive. The new study, led by Anna Bakker, will help future efforts identify which coral reefs would adapt and survive in our changing world. 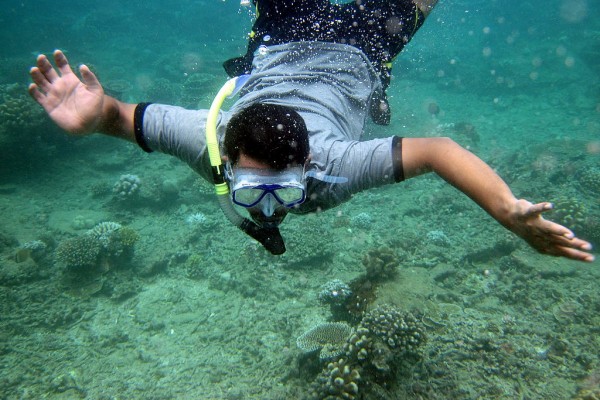 (Photo : Photo credit should read CHAIDEER MAHYUDDIN/AFP via Getty Images)
An environmental activist from the Lamjabat Foundation examines coral for bleaching during in a reef survey in the area of Ujong Pancu, Aceh Besar on July 31, 2010. Coral bleaching , which can eventually kill corals, has been reported throughout South East Asia, the Indian Ocean and the Pacific.

To create the new model for mapping and monitoring coral reef health, Anna Bakker — a Ph.D. student from the Rosenstiel School of Marine and Atmospheric Science at the University of Miami and the lead author of the study — had to gather data on coral reefs from different countries across the South Pacific. Thanks to the Khaled bin Sultan Living Oceans Foundation (KSLOF) and its Global Reef Expedition, she was able to collect the data she needed.

The Global Reef Expedition is a ten-year research mission that has already gone around the world studying the health and propensity of coral reefs toward survival. An ambitious undertaking on its own, the circumnavigating journey involves more than 200 scientists from different institutions around the world working together with local experts in surveying 1,000 coral reefs across 16 countries.

Aside from its standardized ang geo-referenced data on coral covers, fish biomass, and algae, the Global Reef Expedition has also generated high-resolution marine habitat maps — with an equivalent area of over 65,000 square kilometers (over 25,000 square miles) - verified with field-collected data, apearing in a 2019 study on the Coral Reefs journal.

"This research would not have been possible without the massive amount of field data collected on the Global Reef Expedition," Bakker said in the KSLOF press release. "The sheer amount of benthic and fish observations collected in the field from around the world enabled us to take a holistic look at indicators of coral reef health — such as coral cover or fish biomass — and figure out what drives one coral reef to be healthier than another."

Some Factors Affecting Corals More Than Others

Using the KSLOF data across the South Pacific — Palau, Fiji, the Solomon Islands, New Caledonia, Tonga, the Cook Islands, French Polynesia — to generate the model for coral reef health. Bakker also correlated fish biomass and coral and algal covers with natural and man-made factors such as wave energy, human density, degree heating weeks, and protected areas to try and understand which of them lead to differences in the marine environment.

The data revealed that there were only a few factors that drove the variations in the coral reef health, such as fish biomass being largely affected by biophysical factors like water temperature. On the other hand, algal cover was driven more by anthropogenic factors, with the study revealing less macroalgae in places with more protected areas, both in the land and in water.

This short list of critical factors can help governments, institutions, and conservationists arrive at informed decisions on which factors must be prioritized and also help identify which coral reefs have a higher chance of survival in this changing world.