A sandstorm engulfed the northwestern part of China in a scene that can only be imagined in movies. The towering wall of sand engulfed factories and apartment blocks as shown by aerial images of the billowing cloud of yellow dust that smothers Gansu province.

The sandstorm resulted in low visibility, which consequently led to multiple car accidents. Meteorologists have now warned the citizens to stay inside their houses and to keep windows close to avoid the sand from entering their premises. 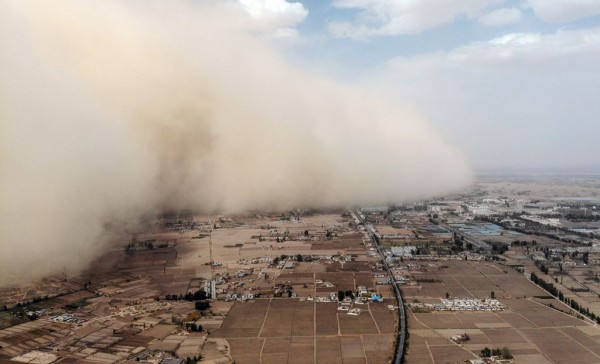 As reported by Phys.org, the 100-meter-high sandstorm in China swallowed the city of Dunhuang which is a tourist draw with its colorful history as a Silk Road outpost.

Zhang, a resident in the Chinese city told local media Jimu News that the sandstorm suddenly appeared and momentarily erased the whole city in just five or six minutes.

"I couldn't see the sun," he said, adding that the city in Gansu province had not experienced such a sandstorm in several years," Zhang told the local media as quoted by Phys.org. "At first I was enveloped in the sandstorm's yellow dust, then it turned red and finally black."

Aside from being a Silk Road outpost, Dunhuang is also home to Mogao Caves, which is a UNESCO World Heritage site that contains ancient Buddhist carvings and extraordinary desert landforms.

The Great Green Wall of China

According to DW, China is always hit by sandstorms every spring when the sand from the Gobi desert is lifted and dumped to cities as far as Shandong on China's east coast and other parts of Asia.

Citizens caught videos of the sandstorm this year and shared them on social media sites that instantly went viral. WION reported that the thick wall of dust carried harmful particles that are detrimental to the residents, especially the elderly, children, and those with chronic respiratory disorders. In Beijing, the air quality index reached a maximum of 500 as hazardous particles blew in from the country's northwestern part and Mongolia.

The Chinese government announced its plans in planting trees that will serve as a natural barrier against sandstorms as a solution to the yearly sandstorm hitting China, DW reported. This project is dubbed the "Great Green Wall," which is part of the country's reforestation projects that will hopefully curb sandstorms.

Beijing said that in 2020, fewer and weaker sandstorms were recorded in part due to the reforestation efforts in the country. But meteorologists continue to advise the public to always prepare for future sandstorms.

How Are Sandstorms Formed?

The World Meteorological Organization said that the combination of strong winds and a large amount of sand and dust from bare, dry soil could result in sandstorms. In dry and semi-arid areas, sand and dust storms are common weather dangers. Thunderstorms, significant pressure gradients associated with cyclones, increase wind speed over a large area.

Strong winds lift a large amount of sand and dust and transport them from hundreds to thousands of miles away. WMO said that 40% of the particles in the troposphere are made up of dust particles from wind erosion such as sandstorms. Global estimates suggest that dust emissions could be between one and three Gigatons per year. The average lifetime of particles could range from hours to ten days, depending on their size.

RELATED ARTICLE: African Dust: How Do Its Emission and Transport Alter the Climate?