Chilean Chinchorro Mummies Now Protected by the World Heritage List; Who Were They?

On Tuesday, July 27, the UNESCO World Heritage List added a new cultural asset to its ranks: the Chilean Chinchorro mummies.

The mummies are of historical and cultural significance first because they are the oldest mummies preserved by humans on purpose. Dated to be more than 7,000 years old, the Chinchorro mummies predate the Egyptian mummies by at least 2,000 years. Additionally, these preserved human remains also offer clues to the ancient South American Chinchorro culture, which once thrived in northern Chile.

UNESCO announced on its Twitter page, writing: "New inscription on the @UNESCO #WorldHeritage List: Settlement and Artificial Mummification of the Chinchorro Culture in the Arica and Parinacota Region, #CHILE." 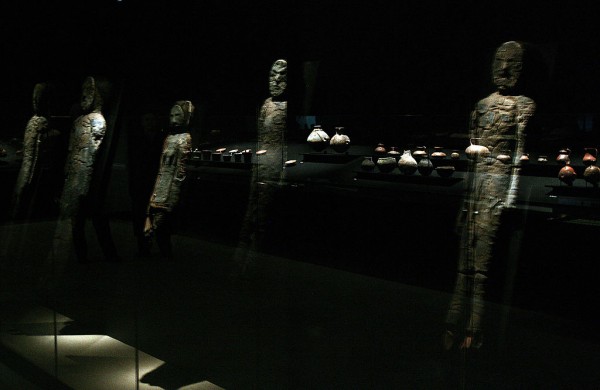 (Photo: Photo credit should read CLAUDIO SANTANA/AFP via Getty Images)
A group of Chinchorro mummies -dated between 5000 B.C. and 3000 B.C.- and several ceramics are on display during the exhibition "Arica, a thousand-year-old culture", on August 27, 2008, in the cultural centre of the La Moneda presidential palace in Santiago.

The Chinchorro Culture, An Ancient Fishing and Mummifying People

The culture that left behind the Chinchorro mummies thrived across the arid and inhospitable regions of the Atacama Desert some 10,000 to 11,000 years ago, according to an article from The Handbook of South American Archaeology. Their reliance on marine resources turned the ancient Chinchorro society into a fishing civilization, leading them to adopt a sedentary lifestyle. Later on, their integration with the contemporary cultures from the Andean Plateau taught them to adopt agricultural practices.

Most of the existing knowledge from the Chinchorro mummies come from the work of Dr. Bernardo Arriaza, a Chilean physical anthropologist who started publishing work on the oldest preserved human remains back in 1984. Among his significant works include developing a classification system for the Chinchorro mummies in 1994, published in the Chungara Revista de Antropología Chilena journal, which remains used by the scientific community until today.

There have been more than 300 of the Chilean mummies found, some of them painted red and black, and others have been bandaged. The Chinchorro people removed the organs and tissues of the deceased. They then removed the skin and resealed the body with sticks and animal hair, a new mane of black hair was attached to the scalp of the remains.

The reason for the practice remains a mystery to the scientific community, although Arriaza previously proposed that it might be linked to arsenic poisoning in the water that led to miscarriages, premature births, and other problems related to pregnancy and childbirth.

"UNESCO is validating on an international level, through different experts, that the settlements and artificial mummification of the Chinchorro culture has exceptional value, that it has a global importance," Arriaza said in an AFP report.

The addition of the Chinchorro mummies comes after a virtual meeting headed by China, with the World Heritage Committee is scheduled from July 16 to 31. It is expected to pick up from the committee's ongoing work, as well as the concerns left when the world was set back by the global coronavirus pandemic. The list now includes thirteen new sites, according to a UNESCO press release.

RELATED ARTICLE: Pregnant Egyptian Mummy Initially Thought to be a Male Priest from 2,000 Years Ago

Check out more news and information on Mummies in Science Times.