A new study from the University of Florida recently showed how a family of bacteria is infecting the body quite successfully.

According to Phys.org, this unique family of bacteria called Yersinia comprises the bacterium responsible for the Bubonic Plague.

It can go undetected by disrupting communication between immune cells and the infected site. Such communication is usually facilitated by certain lipids.

UF/IFAS division of microbiology and cell science assistant professor Mariola Edelmann said that in their research, they showed how Yersinia reduces the infected cell's ability to generate a lipid known as prostaglandin E2.

Edelmann, the study's senior author, also said that typically, in a bacterial infection, the lipid is alerting the immune system that there is a threat. However, in the case of this unique family of bacteria, that particular communication is missing.

ALSO READ: 12-Second Tactic: How To Train Your Brain To Be More Positive 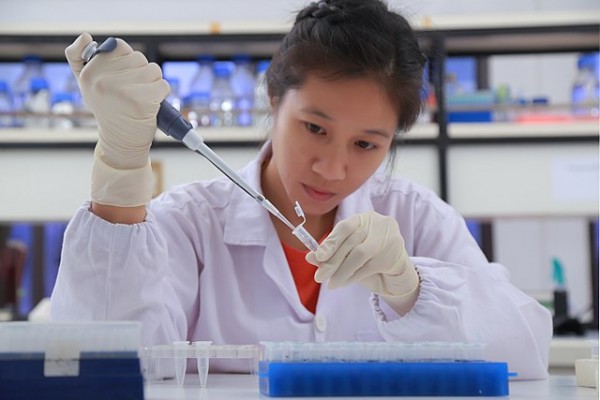 (Photo: A scientist working at a lab)

The senior author explained that while non-steroidal anti-inflammatory medications like ibuprofen are usually used to prevent prostaglandin E2 production from overstimulating, they suggest that for some infections, moderate production of this lipid helps clear the infection.

A similar Digipatrox Health report specified that according to the researchers, in effect, through the blocking of prostaglandin E2 synthesis, Yersinia takes away the ability of the infected cells to seek help. Up to now, scientists do not know how bacteria could do this at the molecular level.

The study's first author, Austin Sheppe, a graduate student in Edelmann's lab, said that this unique family of bacteria has a secretion system that is akin to a small needle the bacterium is using for the introduction of a set of specific enzymes into a cell.

A new review study that Sheppe and Edelmann authored discusses the role prostaglandins are playing in the immune response. It is recently published in the Infection and Immunity journal.

Changing prostaglandins' production to escape the immune system is distinctive to the Yersinia bacteria family, which comprises three closely linked strains that include the Yersinia enterocolitica and Yersinia pseudotuberculosis, both foodborne and can result in gastrointestinal infection; and Yersinia pestis, the one that causes the Bubonic Plague, the same illness that claimed the lives of millions of people in Europe during the Middle Ages.

Edelmann explained that the previous study found out that it is difficult for the human system to detect and clear Yersinia infections, although the exact mechanism is still unidentified.

In their study, the researchers suggest that the ability of the Yersinia bacteria to dodge the immune system by avoiding prostaglandin E2 production makes them quite problematic.

Over 100,000 Cases of Foodborne Illnesses Each Year

Today's humans, unlike those who lived throughout the Middle Ages, may be protected against Yersinia germs by taking antibiotics.

Nonetheless, explained Edelmann, with an increase in antibiotic resistance, not to mention the fact that Yersinia enterocolitica is causing over 100,000 occurrences of foodborne illnesses each year, understanding the manner these bacteria are operating has opened doors to new treatments.

The assistant professor also said that their next step is to examine treatments that can thwart the capability of Yersinia to disrupt the prostaglandin E2's production.

She added that they are interested in studying the lipid's synthetic version, ways to hinder the enzyme of the bacteria or make it so that there is a longer-lasting lipid produced.

The study "Yersinia pseudotuberculosis YopJ Limits Macrophage Response by Downregulating COX-2-Mediated Biosynthesis of PGE2 in a MAPK/ERK-Dependent Manner" is published in Microbiology Spectrum.

Related information about Yersinia is explained on MeD TecH 29's YouTube video below:

RELATED ARTICLE: Why the Worst Year To Be Alive in Human History Is Not the Current Pandemic