In the ongoing pursuit to successfully emulate the human brain, one of the most complex machines known to man, a new study was able to fabricate an artificial neuron that can retain electronic memories.

The new prototype, which could open new paths in the neuromorphic computing and brain-computer interface fields, such as Elon Musk's Neuralink technology, is made from thin graphene slits that contain a single layer of water molecules. Furthermore, instead of using electrons and current flow, the new artificial neuron uses ions (charged particles), much like how the human brain works.

Researchers behind the new neuromorphic memristor present their findings in the journal Science through the report titled "Modeling of Emergent Memory and Voltage Spiking in Ionic Transport Through Angstrom-Scale Slits." 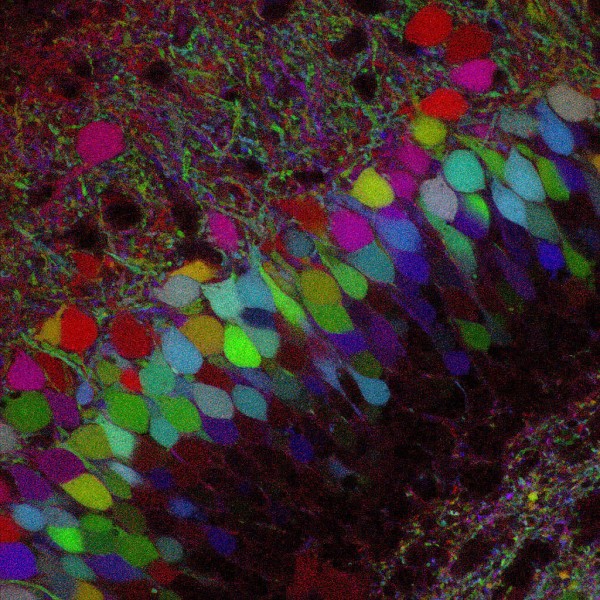 (Photo: AFP via Getty Images)
Image 2: neurons in the hippocampus of a brainbow transgenic mouse.

The human brain is known as an incredibly complex and efficient machine, running a variety of conscious and unconscious tasks despite consuming the energy equivalent of only two bananas a day. Its unmatched efficiency is the result of the brain's base unit: the neuron or the nerve cell. A neuron sends and receives a signal through small sections called ion channels, which open or close because of changes in pressure or membrane surface, according to the Network Neuroscience.

Additionally, these are gated ion channels, allowing ion movement across the plasma membrane that, in turn, generates an electric current creating action potentials, important signals transferred as "messages" between neurons.

While modern computing systems are coming close, these systems still rely on electrical energy, but at levels around ten thousand times more than the brain consumes, keeping energy consumption one of the most important hurdles in creating neuromorphic computers.

The new study showcases the potential of nanofluids, the field of study that examines the behavior of fluids in channels less than 100 nanometers wide. Researchers demonstrated how an electric field could form a single layer of water molecules configured into elongated clusters. This creates a memory resistor that uses ions in the same way neurons work. Building on earlier studies on aqueous electrolytes between graphite layer gaps, the researchers discovered a memristor effect in the material, a current-voltage relationship maintaining hysteresis, whose conductance is affected by the system's history.

Should this artificial neuron be allowed to communicate with another of its kind, it could pose a new method for advancing brain-computer interfaces. The next step in the research is to demonstrate within an experimental setup that an artificial neuron is capable of executing basic algorithms that could prove the potential of the new tech to provide memory recall via an artificial neuron.

Among the ongoing efforts that could benefit from the new and more efficient technology is Elon Musk's Neuralink, which currently finds ways to implant computer chips in the brain. It intends to help restore lost functions and demonstrate the potential of "superhuman cognition," where computers and machine learning systems interact and possibly augment the function of the human brain.

However, the goals that Neuralink currently works on are met with disapproval from some experts and members of the scientific community. In a previous report from Observer, philosopher and psychologist Susan Schneider enumerated potential drawbacks of technologies like the one Neuralink pursues, especially without proper regulations to keep them in place.

Check out more news and information on Neurons in Science Times.