A team of researchers led by Seoul National University developed a soft robot with skin inspired by a chameleon. It can change colors instantly to match its background and camouflage.

According to Daily Mail, an artificial chameleon skin covers the back of the little walking robot that measures 15 inches (38 cm) long, six inches (15 cm) wide, and weighs two pounds (0.9 kilograms).

As it walks with different colors of stripes, segments of the walking robot gradually change into the hue of the background to match it, from orange-red to green, and then to blue. 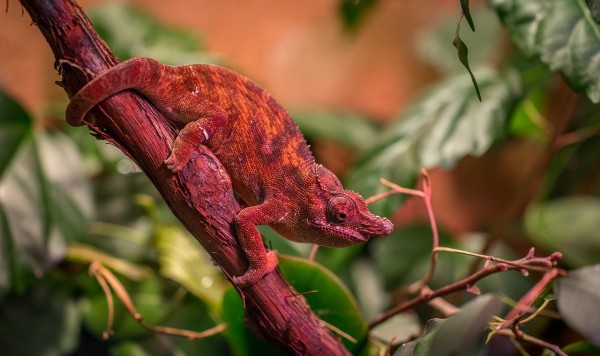 The robot detailed in the study titled "Biomimetic Chameleon Soft Robot With Artificial Crypsis and Disruptive Coloration Skin," published in Nature Communications, is one of the first devices to change colors and patterns based on its environment.

According to Daily Mail, color sensors and feedback systems are built into the walking robot to detect the color of its background. It transitions its skin to a specific color to match it.

On the other hand, Smithsonian Magazine reported that researchers did not make the robots exactly copy the nearby background. Like a real chameleon, they do not shift their shades to reflect the surroundings but to blend in. The team gave the artificial chameleon skin several patterns to choose from with a combination of pre-patterned dots, stripes, and curlicues for the robot to execute its disappearing act.

How Does the Robot Change Colors Like a Chameleon?

The color-shifting skin is made of a thin glaze of liquid crystal that reacts to temperature and changes color based on its environment. These particles combine, forming bigger helical structures that, depending on their size, can reflect a certain color of light. For instance, a larger repeating arrangement gives a reddish color, while a tighter arrangement of liquid crystals gives a bluish hue.

The robot can match the color of its background in half a second as it walks on the floor. Researchers added that the walking robot could effectively hide against a backdrop of leaves and flowers by activating several heater patterns.

The use of temperature-sensitivity has been employed before, but materials engineer Chengyi Xu believes that this latest experiment is impressive. Although he is not part of the study, he said that the team of researchers from SNU did a good job in integrating several technologies to attain the most lifelike chameleon robot so far.

Application of the Robot Chameleon

The application of the technology used in robot chameleon will serve as an invisibility cloak for new military camouflage to help soldiers blend into the background, says study author Seung Hwan Ko. Additionally, this will make a great covert intelligent scout robot that is harder for enemies to spot.

Active camouflage will allow color blending in the background and hide their appearance to better blend in with the environment, according to Daily Mail. However, Professor Ko emphasized that this technology also has other purposes.

The artificial chameleon skin technology can be used as a cloth to patterns according to the person's preference and environment. It can also be used to actively adapt for cosmetic and aesthetic purposes on cars, clothes, or buildings. Lastly, he added that this technology could also be used for future flexible and wearable displays.

Check out more news and information on Camouflage and Robotics in Science Times.