A southern Serbian Caveman identified as Panta Petrovic has made social distancing a choice since he moved into a cave about two decades ago.

According to Firstpost, Panta Petrovic made social distancing a choice after he decided to move into a cave 20 years ago to escape from society, including its lifestyle.

In a Mirror report, the caveman said he was not free in the city. There was always someone in his way, "You either argue with your wife, neighbors, or police," he added. Inside his cave, he continued, nobody's hassling him.

Despite his isolation in a cave, Petrovic learned about the ongoing pandemic affecting almost the entire world. He got to know too, about the global health crisis's causes, as well as its measures last year, after one of his visits to the supermarket in town.

Despite being an ideal example of social distancing, the southern Serbian caveman has not been inoculated against COVID-19.

That very day he learned about the deadly infection, he had decided right away to get injected the soonest he could. 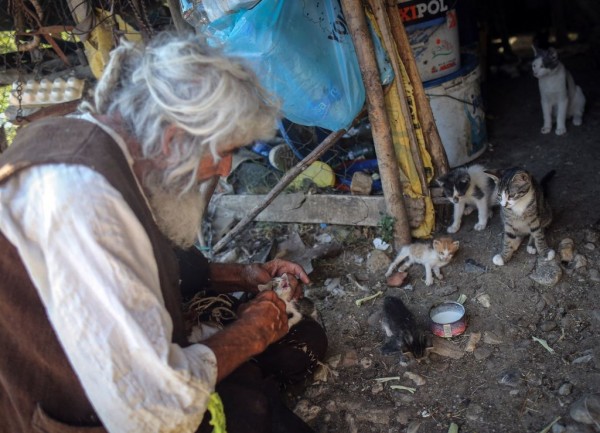 (Photo: OLIVER BUNIC/AFP via Getty Images)
After vaccines against COVID-19 became available, Southern Serbian Caveman Panta Petrovic got jabbed and urged everyone to do the same.

COVID-19 Could Come to His Cave, Too

A France 24 report specified that Petrovic told AFP, the virus does not choose. It could come to his cave, too. The caveman said he wants to get all three doses, including the booster shot available. More so, he said he's urging every citizen to get the COVID-19 vaccine, "every single one of them."

While he further spoke to the news agency, the southern Serbian caveman explained that he does not clearly understand the hassle or fuss about the so-called anti-vaxxes talking about the vaccine.

In addition, reports said, the 70-year-old man is receiving assistance from the government, although he depends on food donations and supplies for his animals, including Mara, his heavy 200-pound wild boar.

Life in the Cave

In the meantime, talking about his reasons for living in a cave, the hermit explained he wanted a quitter, not to mention a simpler life.

Moreover, before deciding to leave his home for good, Petrovic donated all his money to the community by financing three small bridges in town. He told AFP money is cursed and spoils humans. He also said he thinks noting can corrupt a person like money.

Atop one of the bridges, the caveman constructed a pigeon loft which he, despite his old age, effortlessly climbs to stock them with pieces of bread he would find while searching for foods in bins.

Before deciding to spend this kind of life he's presently living, the caveman worked as a laborer in the city. To date, he is seen by people in the quest for food from dustbins. He's going fishing at the local creeks, eating mostly mushrooms.

The present cave he's staying in can just be accessed by a steep climb. Petrovic has an old bathtub which he's using as a toilet. He also has a few benches and a stack of hay he's using as his bed to sleep on.

Report about this Southern Serbian Caveman is shown on The News's YouTube video below: