Prosthetics have come a long way ever since it was invented. For over 5 million people who have undergone an upper limb amputation, advancements in prosthetics have made a great impact on their lives - from simple mannequin prosthetics to neuroprosthetics that is engineered to sense the user's residual muscle signal and mimic intended motions.

Neuroprosthetics, on the other hand, could be pricey, as they cost tens of thousands of dollars and are made up of metal skeletons with electrical motors, making them hefty and inflexible.

According to an article published in Innovation Toronto, researchers from MIT and Shanghai Jiao Tong University designed a new prosthetics that is soft, lightweight, and affordable. It only costs a fraction of neuroprosthetics. Amputees who tested the new device said that their experience with the inflatable robotic hand is similar to those with neuroprosthetics. 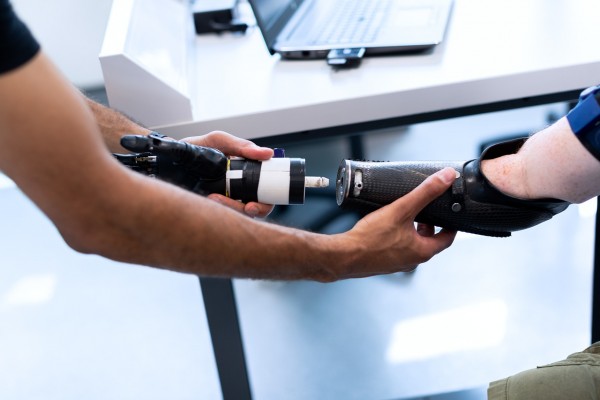 The scientists designed the inflatable robotic hand with a system for tactile feedback, which somehow restores some of the primitive sensations in the user's residual muscles. It is also tough and can bounce back rapidly after being smashed with a hammer or run over by a car.

Techeblog reported that the inflatable robotic hand resembles the famous inflatable helping robot in the animated film Big Hero 6 instead of using mounted electric motors. The prosthetics are composed of five inflatable balloon-like fingers attached to the 3D-printed palm. In total, its components only cost around $500, which is a lot cheaper compared to existing neuroprosthetics.

Professor Xuanhe Zhao of MIT pointed out that the prosthetics they designed are not yet a product, but it is already showing promise and is performing similarly or even better than the existing neuroprosthetics, Innovation Toronto reported.

He added that there is a huge potential for this soft smart hand for low-income families who suffered from amputation.

According to Daily Mail, the MIT researchers used a simple pneumatic system worn at the waist to inflate each finger and bend them in specific positions.

Engineers developed a computer model to connect the desired position of the finger to the corresponding pressure a pump would apply to make that finger move in that position.

Then they created a controller directing the pneumatic system to inflate the fingers in positions that mimic the five common grasps, such as pinching two and three fingers together, a fist, and cupping.

Electromyography sensors attached to the user's limb that measure electrical signals generated by motor neurons send the signal to the pneumatic system. The signals are then decoded and related to the five typical grip types using an existing algorithm.

For instance, when the amputee imagines holding a wine glass, the sensors pick up these muscle signals, and the controller translates it to corresponding pressures that will inflate each finger and produce the intended grasp.

However, their design did not stop only in the five common grasps. The team also enabled tactile feedback to give amputees a real-time tactile control, a feature that is not incorporated in most commercial neuroprosthetics.

They accomplished this by stitching the pressure sensor attached to the residual limb and each fingertip of the smart hand so when it is touched or squeezed, it produces a signal equivalent to the sensed pressure.

Check out more news and information on Prosthetics in Science Times.