As a consequence of "issues" found during tests of the Luna-25 spacecraft, Russia's space agency Roscosmos has decided to postpone its first journey to the Moon's surface in decades.

According to Russia, the mission, which was originally planned to launch on October 1 from the Vostochny Cosmodrome in the Far East, has been postponed for May 2022.

The Luna-25 mission will investigate ice deposits near the Moon's south pole. It will be Russia's first trip to the Moon's surface in 45 years, as well as the country's first in post-Soviet history. 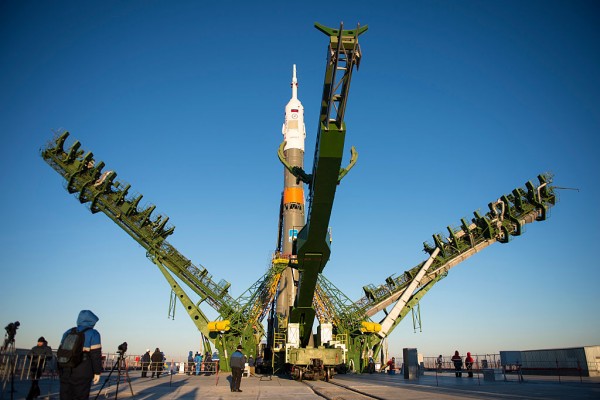 (Photo: Aubrey Gemignani/NASA via Getty Images)
BAIKONUR, KAZAKHSTAN - NOVEMBER 21: The gantry arms close around the Soyuz TMA-15M spacecraft to secure the rocket at the launch pad at the Baikonur Cosmodrome on November 21, 2014, in Baikonur, Kazakhstan. The Launch of the Soyuz rocket is scheduled for November 24 and will carry Expedition 42 Soyuz Commander Anton Shkaplerov of the Russian Federal Space Agency (Roscosmos), Flight Engineer Terry Virts of NASA, and Flight Engineer Samantha Cristoforetti of the European Space Agency into orbit to begin their five and a half month mission on the International Space Station.

Alexander Shirshakov told Interfax news agency (via NDTV) they ran into some issues during testing.

Shirshakov added that a safe landing system is critical and that the Luna-25's soft landing technology is now under development.

The Luna-25 mission was initially planned to launch in October 2021. Luna-25 will be the first home spacecraft to land on the surface of the Earth's natural satellite in the country's contemporary history. Russia's Lavochkin Research and Production Association's press office told TASS that the Luna-25 spacecraft would be built and its testing finished in the summer of 2021.

China was also the first country to retrieve samples from the Moon since the Soviet Union's Luna-24 mission in 1976, starting the race to return to the Moon in full force in December 2020.

As part of the Artemis mission, NASA promised to place the next man and the first woman on the Moon in 2024.

Meanwhile, Russia and China have agreed to establish an international lunar research outpost through a memorandum of understanding.

After the successful mission of Elon Musk's Space X, its space industry received a hit in 2020 when it lost its monopoly on human flights to the International Space Station.

However, Roscosmos has announced many projects, including a Venus expedition and the building of a rocket that could make several flights to space.

Russia has also stated that if President Vladimir Putin approves, it will begin construction on its own space station to send it into orbit by 2030.

The project would make a new era for Russian space research and stop more than two decades of close collaboration with the US onboard the International Space Station (ISS).