Archeology experts recently unearthed a remnant full of emotion from Asia's past. The said finding includes the remains of two individuals embracing each other in their coffin and was theorized to have held each other during the time of their death.

The excavation was conducted at an archeological site in Datong, located in China's Shanxi province. The preserved skeletal remains are identified to belong to a woman equipped with a mysterious band on one of her fingers and a man, both of whom lived 1,500 years ago, as reported by USA Today. 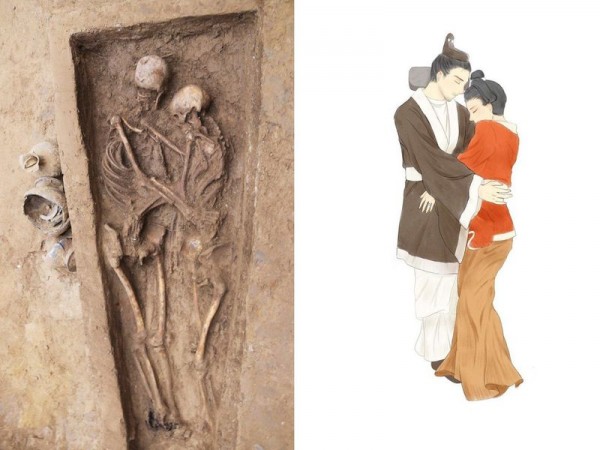 The skeletal remains were unearthed along with 600 tombs of an ancient cemetery in China. According to GNN, the embracing skeletons were theorized to be a couple that lived through the ancient ages of the biggest Asian country between 386 to 534 C.E., precisely during the Northern Wei Dynasty. The dynasty was recorded to have covered almost the entire region of northern and central China.

The skeletal couple was discovered in a position that experts concluded was correlated to the relationship between the owners of the remains. Among the evident clues of their deep bond is that the woman's skeleton is found to succumb to the man's skeleton.

The man was also rested in an unusual burial position, sideways and holding the woman's skeleton on the waist. Previous embracing skeletal remains were already dug in other countries, but this is the first to be unearthed in China.

According to the experts, the unearthed bones are among the rare evidence of the expression of relationship bonds during burial, pretty much like the initial findings of the same skeletal post in India's Taj Mahal. Xiamen University anthropology expert and co-author of the study Qun Zhang said that the practices under Buddhism were made popular during the Northern Wei era, and many insights about the afterlife have flourished the culture, as reported by Smithsonian Magazine.

With that said, the skeletal remains of the couple were an act of love and were a process to continue the bond after death. It is also possible that one of the individuals killed themself to compensate for the death experienced by their other half.

The multiple theories root from the trauma identified in the man's remains, suggesting either he killed himself for the process, was killed during the process, or was the initial dead body that the woman tried to pursue beyond death. Either one of them was initially dead, or both died at the same time remains unsolved.

One of the distinguished clues on the burial site was the band on the ring finger of the woman's skeleton. It was analyzed by Texas A&M University dentistry expert and co-author of the study Qian Wang, and the results revealed that the band was of no economic value during that time.

Wang said that the mere silver ring is a stunning discovery of how the ancient humans express affection during times where ethnicity and culture are in an extensive transition.

The whole coverage of the embracing skeletal remains in China was published in the International Journal of Osteoarchaeology, titled "Eternal Love Locked in an Embrace and Sealed With a Ring: A Xianbei Couple's Joint Burial in North Wei Era, China (386-534 CE)."