Hubble's latest capture looks similar to the shape of a sword in a gigantic form, with the blue light effect similar to the famous 'lightsaber.' The giant line appears to pierce through a reddish cosmic material, which was the inspiration to dub the phenomenon as the 'blue sword' and the 'celestial heart.' 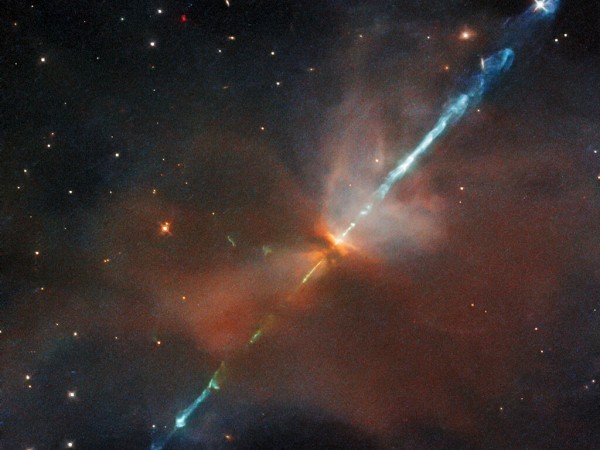 The sword-like object was identified as the effects of a protostar or newborn star known as the IRAS 05491+0247. The blue-colored blaze of the sword is made of ionized gas in the form of twin jets of the said star. The twin jets are seen on the image to repel each other and rocket towards the opposite space of the stellar body, making a bipolar flow.

The heart-like object is simply made of the newborn star's after-effects throughout the entire alluring process. The reddish materials are composed of gas and dust particles accumulated as clouds formed just around the protostar. Hubble experts explained that the refined presentation captured by the telescope falls into the category of Herbig-Haro.

The Herbig-Haro object captured by the Hubble Space Telescope was named HH111. According to a report by Space, the newly discovered Herbig-Haro is charted at the famous Orion constellation, over 1,300 light-years away from our planet.

Hubble was able to spot the bipolar flow from the cosmic sword, and the heart through the help of an equipped observation instrument called the Wide Field Camera 3 or WFC3. The telescope instrument utilized both its optical and infrared approaches to capture the physical features and wavelengths of light from the Herbig-Haro.

The European Space Agency ESA is in a collaborative project with NASA in conducting observations and examinations using the Hubble Space Telescope. According to the image description provided by ESA, Herbig-Haro objects are evidently fond of releasing lights that are observable to the naked eye.

However, these optical wavelengths are truly challenging to identify because of the massive clouds of dust and gas that cloaks and absorbs the lights from the main stellar body. Using the WFC3 instrument, Hubble successfully captured the entire image of the cosmic phenomenon through infrared.

The Hubble Space Telescope has been doing its work very well since its launch aboard the Discovery back in 1990. One of the first problems that the telescope encountered was the fuzziness of the initial images it captured.

Hubble's first issue was traced back to a flaw from the telescope's primary mirror spanning 2.4 meters. The first-ever anomaly on the space telescope was finally resolved sometime around 1993, which was also among the major upgrades of the telescope and the beginning of the numerous equipment it has acquired.