Although supervolcanoes have not made massive super-eruptions for thousands of years, they remain active and dangerous. It stresses the necessity to approach them and offer insights that can potentially predict their activities.

The new international study resulted from a collaboration between researchers of the Oregon State University in the U.S., Curtin University in Australia, Heidelberg University in Germany, and the Indonesian Geological Agency.

"Gaining an understanding of those lengthy dormant periods will determine what we look for in young active supervolcanoes to help us predict future eruptions," explains Martin Danišík, the lead Australian author and an associate professor from Curtin University's John de Laeter Centre, as reported by Forbes.

He additionally explained that supervolcanoes have generally erupted a couple of times before, with tens of thousands of years in between larger super-eruptions. However, what happened between those major events remains unknown.

Also, Danišík stressed that completely understanding the behavior and function of supervolcanoes could help humanity better prepare for the inevitable future threat of super-eruptions. 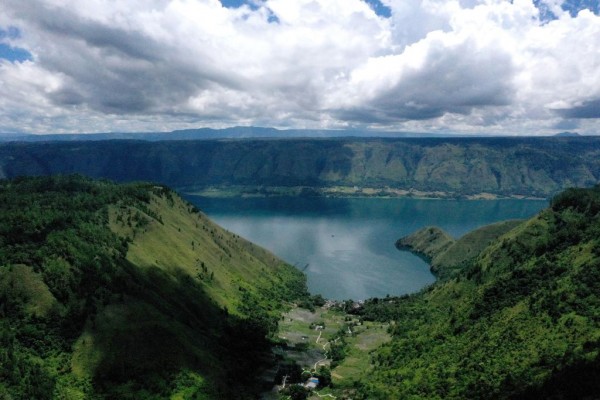 (Photo: Photo by GOH CHAI HIN / AFP)
This aerial picture taken of April 4, 2019, shows Indonesia's Lake Toba, from Sigapitan, which covers some 1,707 square kilometers of North Sumatera, nearly twice the size of Singapore, the lake formed by a gigantic volcanic eruption some 70,000 years ago, it is the largest resurgent caldera on Earth. - Lake Toba is one of President Joko Widodo's "10 New Balis" growth strategy - a plan that aims to replicate the economic effects of tourism in Bali nationally.

To solve this matter, the international research team investigated the magma left on the Toba Caldera, a caldera complex in North Sumatra, after one of its super-eruptions occurred 75,000 years. They searched for traces of feldspar and zircon, which offer clues on time passed since they were formed, based on the accumulation of elements like helium and argon in between the grains of the minerals.

The eruption of the Toba supervolcano, which created the Toba caldera complex on what is now Sumatra, Indonesia, is known as Earth's largest volcanic eruption over the last 28 million years.

Parts of Indonesia, the Indian Ocean, and the Indian subcontinent were all covered by some six inches of debris, a volume of volcanic materials equivalent to almost 3 million Empire State Buildings, creating a crater visible from space, according to an AGU blog post.

The volcanic ash and gases from the eruption also led to a volcanic winter as the atmosphere partially blocked sunlight, causing a drop of about 3 to 5 degrees Celsius worldwide.

Magma Continued Flowing Out of Caldera Thousands of Years After Eruption

Through a mix of geochronological data, statistical inference, and thermal modeling, researchers discovered that magma continued to flow out of the Toba Caldera or within deep depressions created by the super-eruption and continued for 5,000 to 13,000 years after the major event.

A carapace of solidified residual magma was supposedly pushed upward "like a giant turtle shell," as Danišík explains. Furthermore, this subsolid rock led to an eruption that formed the Youngest Toba Tuff in India, Indonesia, parts of Asia, and as far as Central Africa.

Complete details about the danger and activity of supervolcanoes are detailed in the paper "Resurgence Initiation and Subsolidus Eruption of Cold Carapace of Warm Magma at Toba Caldera, Sumatra," appearing in the Nature - Communications Earth & Environment journal.

Check out more news and information on Supervolcanoes in Science Times.