Whales, dolphins, and other marine animals are experiencing stress from tourist boats that affect their populations. Although whale watching is an economic move to provide incentives in preserving their species in their natural habitat, researchers from Whale Wise found that ship noise could cause stress to them. 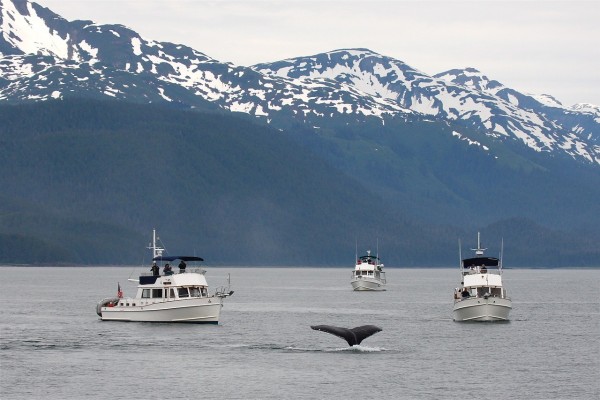 According to Phys.org, they use drones with two attached petri dishes to collect water droplets from the whales' spray to get samples for analysis before whale watchers arrive in the waters of North Atlantic off Iceland to admire these majestic marine species. They aim to study the stress levels on whales due to ship noise from the boats of whales watchers.

Previous studies were mostly based on behavioral observations, which mostly concluded that tourist boats have only caused minor behavioral disruptions on whales and dolphins. But a 2011 study showed that whale watching activity was disrupting minke whales in Faxe Bar near Reykjavik.

Marianne Rasmussen, director of the University of Iceland Research Center in Husavik, said that tourist boats have caused a short-term disturbance in the feeding of minke whales that does not cause their overall fitness.

On the other hand, the research by biologists from Whale Wise used a method that has never been tried in Iceland before. They took samples from the water sprays of whales and found traces of cortisol. It is a hormone related to stress that can determine the physiological stress levels of the whales.

The team was able to collect 59 samples since 2018 and hopes to collect more for up to 100. They collaborated with the French environmental Group Unu Mondo Expedition this summer, wherein some samples were collected in Iceland during a month-long expedition to study climate change.

According to the International Whaling Commission, whale watching has contributed a significant amount to the world economy that employs thousands of people since 2009. For instance, coastal communities in New Zealand have transformed the introduction of whale watching tourism by having annual tourists of around 873,000 people.

But aside from income and employment, whale watching also became an educational avenue to foster an appreciation for wildlife in its natural habitat and raise awareness of their conservation needs. Also, it becomes an opportunity to collect data on the distribution, population habitats of marine mammals.

However, like what biologists from Whale Wise found, whale watching also brings disadvantages to whales. Previous studies have compiled the short-term and long-term effects of whale watching.

But a study from researchers in the University of Aberdeen, titled "Unsustainable Dolphin-Watching Tourism in Fiordland, New Zealand" published in the journal Tourism in Marine Environments, linked whale watching activities to a decrease in whale population size and movement away from the area targeted for tourism.

The commission wrote on their website that management measures and regulations could minimize the impact of whale watching activities. It should be tailored based on the species, area, and types of vessels involved in the industry.