Did a Black Hole Cause a Rare, Premature Supernova? Scientists Explain How It Happened

Astronomers have found a new sort of supernova for the first time. After meeting with an incredibly massive object, maybe a black hole or a neutron star, an unfortunate star appears to have burst prematurely, leaving a distinct trace in the sky.

Certain astronomical phenomena, particularly those that are unique, leave behind temporary calling cards. Short, brilliant bursts of radio waves that fade away rapidly are known as radio transients. Catching a glimpse of them at the proper time can show the explosive nature of merging stars.

CNN, citing Dong's interpretation of the event, said the explosive outburst occurred from a star engulfed by a thick shell of gas. The gas had been ejected from the star hundreds of years earlier. When the star exploded in a supernova, a brilliant explosion happened. When the exploding material collided with the gas shell, a brilliant burst of radio waves resulted. 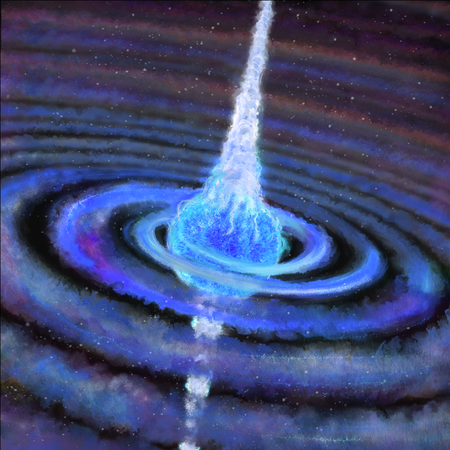 (Photo: Chuck Carter/Caltech)
This illustration shows a massive star that is about to explode. The explosion was triggered after its dead-star companion (a black hole or neutron star) plunged into the star's core. Scientists say that the black hole or neutron star rammed into the massive star and then, as it traveled inward over the course of centuries, ejected a spiral of material from the star's atmosphere (pictured surrounding the star). When it reached the star's core, material from the core rapidly fell onto the stellar corpse, which led to the launching of a pair of jets at nearly the speed of light. In this artist's depiction, the jets are shown tunneling through the star and soon set off the supernova explosion. After a few years, the supernova will crash through the bulk of the ejected spiral, extending to about 10,000 times the size of the star. This will create the luminous transient radio source observed by the Very Large Array.

However, Dong had more doubts regarding when and why the star first expelled its gas.

In a statement, Caltech graduate student Anna Ho recommended that the radio transient be compared to known brilliant X-ray bursts that last barely a few seconds.

Slashgear said Dong located X-rays in the exact location as the strong radio transient. The researchers indicated that they were most likely produced by the same source.

According to Dong, the X-ray transient was a rare occurrence. He added that the transient indicated the deployment of a jet at the time of the explosion. Relativistic jets are electrified matter beams that travel at almost the speed of light.

Dong said the debris from the explosion eventually collided with a huge torus of dense gas expelled from the star millennia before. These two occurrences have never been linked back, and they are incredibly unique on their own.

How VLT Solved The Weird Mystery

Tech News Taiwan, citing the researchers, said two stars were born and created a system of concatenations a long time ago. One of which died later in a supernova explosion and became a neutron star or black hole. But as gravity crossed paths with two objects closer to each other, the nearby star swallowed up the death star. It orbited in the outermost surface of the latter for hundreds of years.

Large masses of gas and dust were released around the star during this time to form a material shell. The massive energy jet from the death star was noticed in X-ray form by maxi in 2014, after which debris from the explosion hit the nearby material shell at high speed, making visible light and radio radiation, which was found by a vast antenna array.

A big star should have burst after running out of core fuel. Still, the event was triggered by a dead partner in the system pushing it into the ocean, causing the massive star to explode early, according to scientists.