Planet 9: Is Its Existence in the Solar System True or Is It Just an Illusion? Here's What Studies Say

Astronomers speculated the presence of Planet 9 in the solar system's furthest reaches in 2016. The paper's theory was based on abnormalities in the orbits of objects in the Kuiper belt orbiting the sun.

The presence of an as-yet-undiscovered planet, according to the scientists, thoroughly explained the odd grouping of ice asteroids and comets near the Kuiper belt. The statement, which was thought to be six times the mass of Earth, sparked widespread outrage.

Researchers shared the details of the 2016 study, titled "Evidence for a Distant Giant Planet in the Solar System," in the Astronomical Journal.

Science Times previously reported that the existence of Planet 9 had caused controversy, with many scientists claiming that it does not exist. 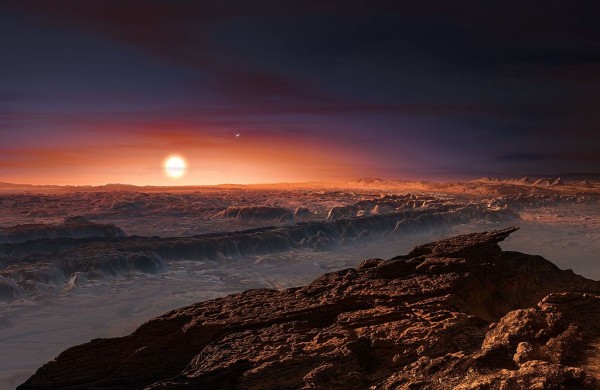 (Photo: ESO/M. Kornmesser via Wikimedia Commons)
This artist’s impression shows a view of the surface of the planet Proxima b orbiting the red dwarf star Proxima Centauri, the closest star to the Solar System. The double star Alpha Centauri AB also appears in the image to the upper-right of Proxima itself. Proxima b is a little more massive than the Earth and orbits in the habitable zone around Proxima Centauri, where the temperature is suitable for liquid water to exist on its surface.

Others have hypothesized that the object is a mirage or a grapefruit-sized black hole.

The Hubble Space Telescope detected an exoplanet 336 light-years from Earth with characteristics similar to Planet 9, HD 106906 b. This was likewise discussed in a paper titled "First Detection of Orbital Motion for HD 106906 b: a Wide-separation Exoplanet on a Planet Nine-like Orbit."

According to NASA, Planet 9 might be 20 times the distance between the sun and Neptune. According to Batygin, imagining our solar system without Planet Nine is more difficult than imagining it with one.

Regardless, the quest for Planet 9 went on. Surprisingly, another astronomer has released another research limiting the region where the enigmatic planet may be hiding.

Astronomer Michael Brown, who was mainly responsible for Pluto's relegation to a dwarf planet from its prior status as the solar system's "ninth" planet, refuted some astronomers' assertions. Some cosmonauts assume that abnormalities found in objects in the Kuiper Belt may be a statistical fluke.

Brown and his colleague Konstantin Batygin shared the details of the study, titled "The Orbit of Planet Nine," in arXiv.org. According to National Geographic, the Astronomical Journal has approved the paper for publication.

The odds of the anomalies being a fluke owing to "observational bias" are less than 0.5 percent, according to Brown's re-examination of the original evidence released in 2016. The study also offered a "treasure map" that astronomers might use to determine the ideal locations to search for the planet.

NBC News said Brown and Batygin threw in a few more recent sightings of objects and determined that the grouping is very likely true. There's only a 0.4 percent chance it's a fluke, according to their calculations.

That means Planet 9 is very likely out there, and the new research provides a "treasure map" of its alleged orbit, which informs scientists where to hunt for it in the sky.

Brown is analyzing data from different astronomical surveys to really see Planet Nine for the first time. If that search fails, he hopes to find it in survey data from a new big telescope at the Vera Rubin Observatory in the northern Chilean highlands, which will begin full operations in 2023.

The investigation also discovered that Planet 9 might be closer to the sun than the initial study, the same NBC News report said. The claim implied that the planet would be brighter and easier to detect due to its tighter orbit.

According to Brown, if the planet exists, it will most likely be a cold gas giant like Neptune, with a mass of six to ten times that of Earth.

Instead of being more than 400 times the distance between Earth and the sun at its closest, the researchers said the extended orbit is only approximately 380 times that distance.