Large Land Birds Fly Over the Open Ocean Without Taking A Break or Rest: Here's How They Do It

Birds fly in groups across continents during migration season as they seek food and shelter that have more hospitable weather conditions. However, flying non-stop for hundreds of miles across the open ocean is not an easy feat.

Researchers from the Max Planck Institute of Animal Behavior and the University of Konstanz in Germany used GPS tracking technology to monitor the global migration of five species of land birds to understand how they managed to fly nonstop across the open ocean.

They published their findings in the study, titled "The Interplay of Wind and Uplift Facilitates Over-Water Flight in Facultative Soaring Birds," in the Proceedings of Royal Society B. 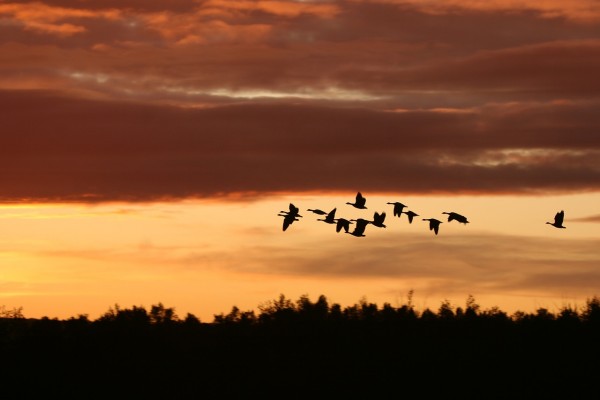 (Photo : Pixabay)
Large Land Birds Fly Over the Open Ocean Without Taking A Break or Rest: Here's How They Do It

According to RSPB, a nature conservation charity in the UK, there are at least 4,000 species or 40% of the total number of birds in the world that are estimated to be regular migrants. Some of them could even wander in gardens.

But these birds face many challenges during migration, especially for land birds because they could not rest and feed on waters like seabirds. That means they have to fly nonstop across hundreds of miles on the vast ocean.

Science Daily reported that researchers sought to examine this sea-crossing behavior by monitoring 65 birds across five land bird species. Using GPS tracking technology, they analyzed 112 sea-crossing tracks that were collected over the span of nine years. A large collaboration of scientists from all over the world has shared information to make this study possible.

Their findings emphasized the role of tailwind in facilitating the sea-crossing behavior of land birds and reveal their widespread use of uplift, the rising thermals, to help them soar nonstop over the open sea. The suitable uplift helped them save energy because it means less drag that makes it less energy-draining.

Study first author Elham Nourani said that the study showed that uplift is neither weak nor absent over the sea surface because the majority of migratory birds adjust their route to benefit the best tailwind and uplift conditions during migration, helping them to sustain flight for hundreds of miles.

For instance, ZME Science reported that the team collected data of five raptor species performing long sea-crossing behavior. They all differ in size, morphology, and stop-ver strategies depending on how they soar to cover long distances.

Oriental honey buzzards fly nonstop for 18 hours to cover 434 miles (700 kilometers) distance during autumn when air conditions are optimal. They take advantage of the uplift to soar up to one kilometer above the sea surface, Nourani said.

The study implies that climate change could affect how migratory birds will be affected as they depend on the atmospheric support to fly hundreds of miles. Their vulnerability to any changes to Earth's climate could adversely impact their migratory behavior.

Nourani noted that a collaborative effort between scientists to unravel general patterns of how large land birds depend on weather patterns is essential to make robust predictions on the impact of climate change on migratory birds.

Scientific American previously reported that rising temperatures have already affected these birds. Compared to previous years, birds are now migration a little earlier each spring, cutting their journey by at least two days each decade.

Check out more news and information on Birds in Science Times.