A collaborative team of international researchers has, for the first time, successfully sequenced and analyzed the intricate genome of the Kakapo parrot, a flightless bird endemic to New Zealand. Results of the study show that despite roughly 10,000 years of inbreeding, the Kakapo species surprisingly has healthy genes.

What are Kakapo Parrots? 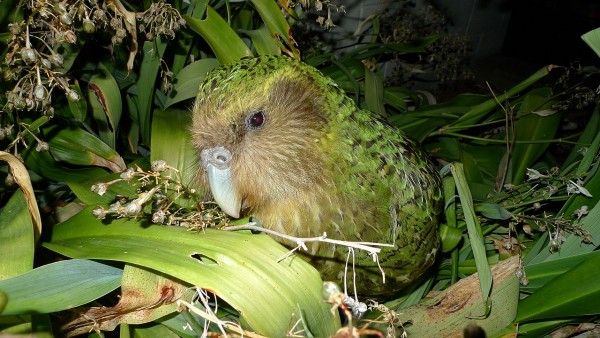 Kakapo, according to the Department of Conservation New Zealand, are a nocturnal flightless parrot species endemic to New Zealand. It's a large green parrot known for its distinctive owl-like face and waddling gait that, despite being flightless, can climb very well.

It is the only flightless parrot species in the entire world. Its wings are used for support and balance rather than balance with its feathers being softer than other species since it doesn't need the same structural integrity for flight. Moreover, the Kakapo is the only parrot species that mates via lek-breeding.

Historically, these birds are known for their friendly demeanor with Maoris and early European settles having kakapos as pets.

ALSO READ: New Zealand Tuataras: How Its Speedy Sperm Could Save the Endangered Species

After the Polynesian colonization in 1360 Ce and European colonization in the 1800s, overhunting, and introduction of new mammalian predators New Zealand underwent a major extinction event of a large portion of its endemic species. Kakapo parrots which were once widespread numbered near thousands were reduced to roughly 51 birds by 1995. 50 of which were isolated in the Steward Island and one male, Richard Henry, remained on the mainland.

Only Richard Henry and 39 birds from the Steward Islands were able to reproduce, thus the only ancestors of all kakapos were born after 1995. As of today, only 201 kakapos survived and managed to survive on an island sanctuary.

Dr. Nicolas Dussex from the Center for Palaeogenetics and Stockholm University explains that despite kakapos being one of the most endangered and inbred bird species in the globe its genes have significantly fewer harmful mutations than what researchers expected. In a study published in the journal Cell Genomics, titled "Population genomics of the critically endangered kākāpō" data suggested that the surviving kakapo population on Steward Island has been cut off for roughly 10,000 years, during which harmful mutations has been selectively removed in a process known as 'purging' which was facilitated by inbreeding.

Professor Love Dalen, a co-author of the study and a researcher at the Swedish Museum of Natural History and Center for Palaeogenetics, says that small populations often lead to harmful mutations and genetic diseases. Findings of the research showed that the kakapo genetics had a reduced number of harmful mutations which shows that inbreeding in current populations is likely to have even less impact on the parrot's genetics compared to the team's initial hypothesis.

The team sequenced and analyzed about 35 modern kakapo genomes from the population surviving on the island sanctuaries including 14 genomes from the now-extinct mainland population. Scientific theory suggests that in cases of small populations deleterious mutations accumulate which leads to increased risks of extinction and genetic diseases. However, it is also possible for the adverse gene variants to be exposed through inbreeding and eliminated by natural selection reported SciNews.