Indian Drug Regulator Approves Use of the ZyCoV-D Vaccine Against COVID-19; The First Authorized DNA-Based Inoculation

The ZyCoV-D vaccine, which was developed in India developed is now authorized by drug regulators in the sub-continent.

A Gulf News report specified that "DNA "is the blueprint of life." Meaning, humans' genes, made up of DNA, determine the manner cells reproduce.

More so, genes define one's heredity. Interestingly, some genes have proven to act as well as instructions to generate molecules like proteins. In short, this is the notion behind DNA-based vaccines.

A dozen other vaccine candidates that use the plasmid DNA platform are currently being tested in different countries worldwide. However, this approval of ZyCoV-D signifies a breakthrough in medical science, described as a "new wave in vaccinology." 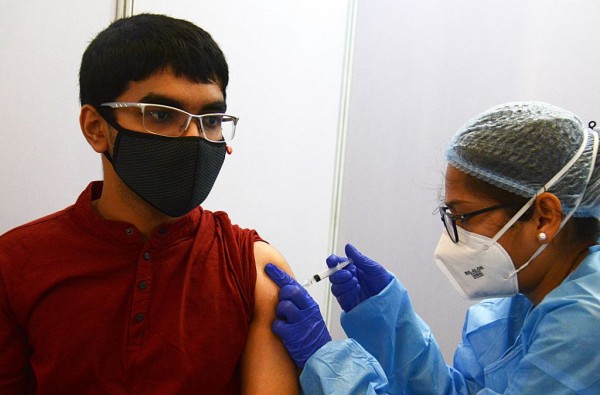 (Photo: SUJIT JAISWAL/AFP via Getty Images)
A health worker inoculates a man with a dose of the Covaxin vaccine against the Covid-19 at Dr. Antonio Da Silva High School in Mumbai on August 17, 2021.

This plasmid DNA vaccine was developed by Zydus Cadila, an Indian pharmaceutical firm based in Ahmedabad, with backing from the Biotechnology Industry Research Assistance Council of India. Last month, it was approved by the country's drug regulator.

Essentially, ZyCoV-D is the second home-grown vaccine of India; the first was the Bharat Biotech-developed Covaxin, joined by the Indian Council Media Research and the National Institute of Virology.

Based on interim data analysis, CNBC reported, as seen on the news agency's YouTube video below, that ZyCoV-D has 67-percent vaccine efficacy or VE. VE is defined as a shield from symptomatic COVID-19.

Such efficacy is essentially against the currently dominant strain, the Delta variant. In connection to this, trials for this vaccine were carried out in India, where the said variant was initially reported.

The Indian pharmaceutical firm first applied for approval in July this year. After a month-long assessment, the Drug Controller General of India approved the use of the vaccine.

3 Doses for 12 Years and Older

To achieve the efficacy of ZyCoV-D, according to Zydus Cadila, three doses are needed to be completed. It has been approved for administration in individuals 12 years old and above.

Out of this number, 21 symptomatic COVID-19 cases were detected in an inoculated group, and 60 among those were given a placebo, a Nature report specified. Included in the said Phase 3 trial were adolescent individuals aged between 12 and 18 years old.

In an Indian media, the firm said no full results of this Phase 3 trial had been published. The full assessment has yet to be submitted for publication soon.

The company also announced its plans to make up to 120 million doses of its ZyCoV-D vaccine each year. Zydus also said the first doses would begin to be administered this month in India.

Safe Use of the Vaccine

In July this year, The Indian Express came out with a report about the ZyCoV-D vaccine safety. Here, the company further stated, there had been no safety concern observed for the vaccine in "repeat-dose toxicology" investigations by intramuscular, as well as intradermal routes of inoculation.

Meanwhile, up to thrice in rabbits, the intended human dose was found safe to use, well-tolerated, not to mention immunogenic, as indicated in the statement.

The statement further specified that with this plasmid DNA vaccine, Zydus has succeeded in establishing the DNA vaccine platform in India through using non-duplicating and non-integrating plasmid, carrying the gene of interest, resulting in a safety for use.