How Does a Venus Mission Look Like? Here's How Russia Did It! [WATCH]

Only four spacecraft have ever sent back pictures from the surface of Venus. The world next door doesn't help matters, with scorching heat and crushing pressure that destroys any lander swiftly.

Only a few Soviet Union's Venera spacecraft took only Venus' surface between 1975 and 1982. The Veneras scanned the surface back and forth to produce panoramic pictures of their surroundings, which they called "Venus" in Russian. They displayed exotic and familiar yellow sky and broken, devastated landscapes-views of a world that may have previously been like Earth before catastrophic climate change.

Between February 1961 and March 1964, the Soviet Union attempted seven times to send a spacecraft to Venus. Space.com that all the missions failed due to a series of upper-stage launch problems. These early flights were given an alpha-numeric name by the Soviet space program; "Venera" was reserved for missions that had at least departed Earth orbit. 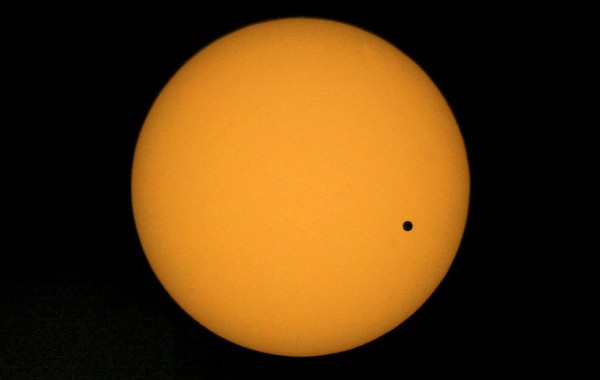 (Photo: Uriel Sinai/Getty Images)
TEL AVIV, ISRAEL - JUNE 8: (ISRAEL OUT) The planet Venus is visible as a black dot as it transits across the face of the sun as seen from the Tel-Aviv university June 8, 2004, in Tel-Aviv, Israel. The rare astronomical event last occurred in 1882, while the next transit was due in 2012.

Ladbible said Venera 15 and Venera 16 were orbiters that were launched in 1983 to survey the surface of Venus. Each ship arrived in October 1983 and was in service until July 1984.

Astronomy.com said the Venera 13 and 14 probes, launched in 1981, were more advanced versions of the Venera 9 through 12 probes, carrying landers with sophisticated acoustic sensors that could tune in to the Venusian wind and determine its speed.

NASA said Venera 11 and Venera 12 both reached the surface of Venus in December 1978. The space agency said the missions suffered color camera failures, resulting in no photographs being returned.

Thunder and lightning were detected by Venera 11, as well as low amounts of carbon monoxide.

NASA said Venera 10, which launched into orbit above Venus on October 23, 1975, landed two days later. It returned black-and-white photos of flattened lava rocks and data on the speed of the wind on the surface.

Venera 9, according to NASA, was the first of a new series of Soviet space probes (4V) meant to investigate Venus, based on the Mars platforms M-71 and M-73.

The lander was meant to send a full 360-degree panorama. Still, only a 180-degree panorama was obtained since one of the two camera covers failed to deploy. It was like a foggy day on Earth when it came to illumination. Flat rocks strewn about the lander were plainly seen in the picture.

NASA said Venera 8 was the Soviet Union's first voyage to Venus, and it was a complete success.

The probe landed on the surface on July 22, 1972. It functioned for 50 minutes, bringing back data on the quantity of light reaching the surface and verifying the temperature and pressure data obtained by Venera 7.

The Soviet Union's Venera 7 mission, NASA said, became the first spacecraft to softly land on another planet and relay back data from the surface on December 15, 1970.

Venera 7 reported a temperature of 887°F (475°C) before succumbing to the heat and pressure around 23 minutes after landing.

According to NASA, Venera 5 and Venera 6 - launched five days apart in January 1969 - capitalized on Venera 4. Each spaceship launched a tiny capsule with science instruments that descended through the Venusian atmosphere via parachute. Each one lasted around 50 minutes before collapsing under the weight of Venus' atmosphere.

After another catastrophic failure in November 1965, the Soviet Union decided to take a two-year break from reaching Venus and changed its strategy. Venera 4, NASA said, became the first probe to successfully return data from inside Venus's atmosphere.

On its journey to Venus, the Venera 1 spacecraft, launched on February 12, 1961, lost contact. NASA said that Venera 2, launched on November 12, 1965, was the first of the probes to fly past Venus three months later. But it failed to relay any data from the visit.

RELATED ARTICLE: Life on Venus: Volcanic Activities Might Explain the Presence of Phosphine in the Atmosphere